Summary
A lot of the power of ApexSQL Enforce is its combination of:

This article is a how to guide on getting started with rules in ApexSQL Enforce.

What ApexSQL Enforce does when it processes a database or a script is to load it, extracting all of the metadata and parse all of the scripts into a parse-tree. All of this information is then loaded into an object model which serves as the internal API that rules can be written against by users themselves, via the built in IDE, using auto-complete. 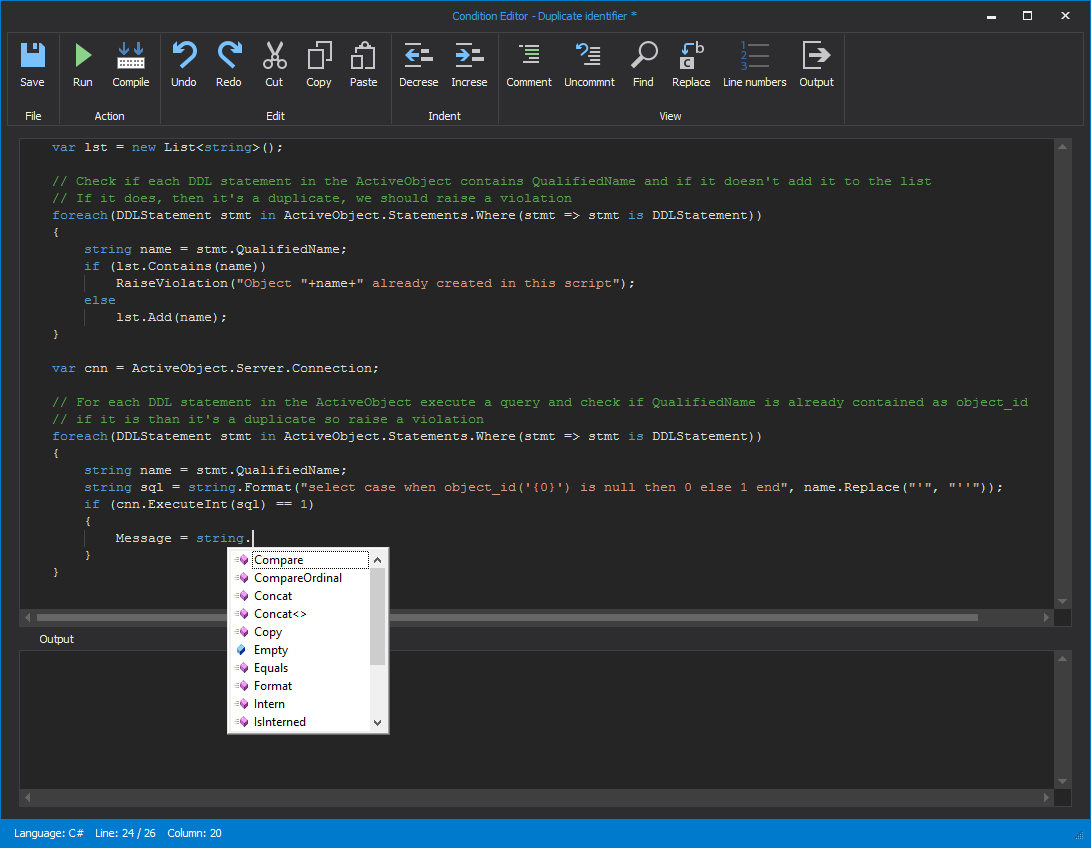 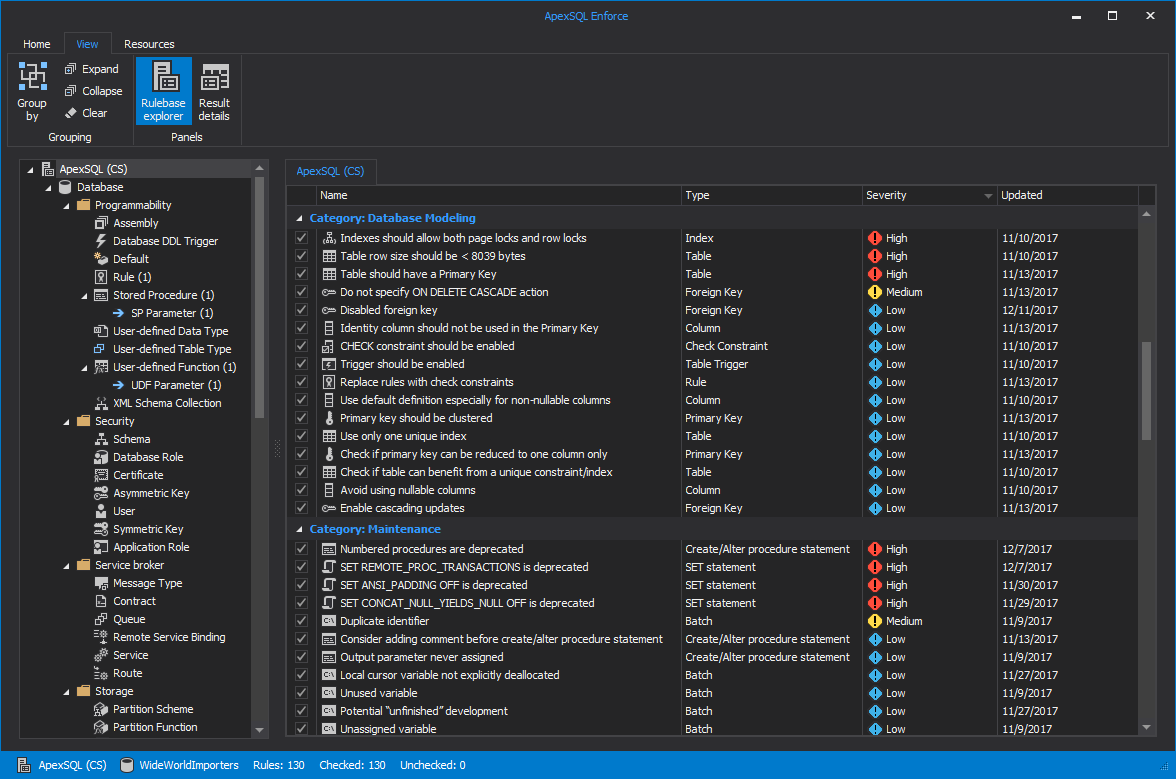 This sounds complicated, but we’ve abstracted that complexity with an easy to navigate internal API complete with auto-complete and syntax highlighting that makes writing rules often as simple as connecting the dots … literally. 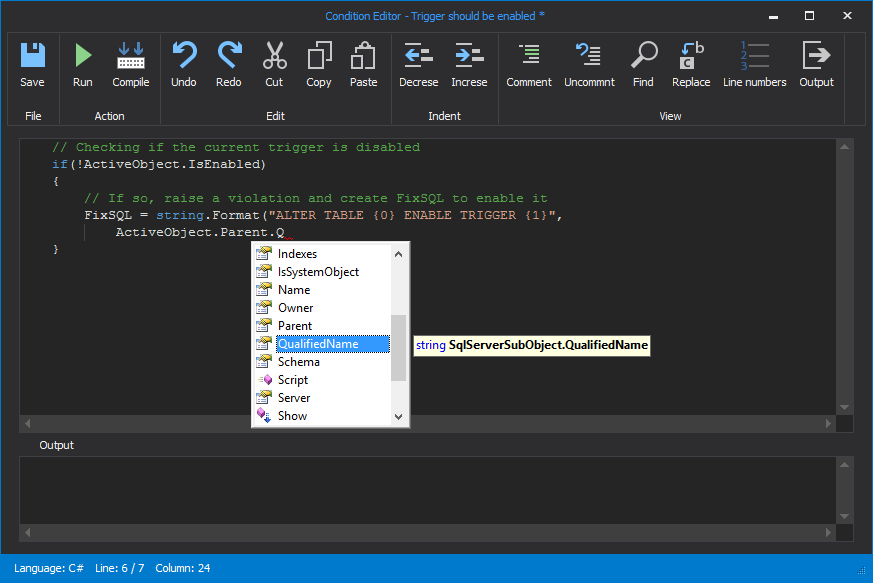 The core component of a rule is the condition, what the rule is evaluating, and the result, which is generally whether a violation is raised or not. 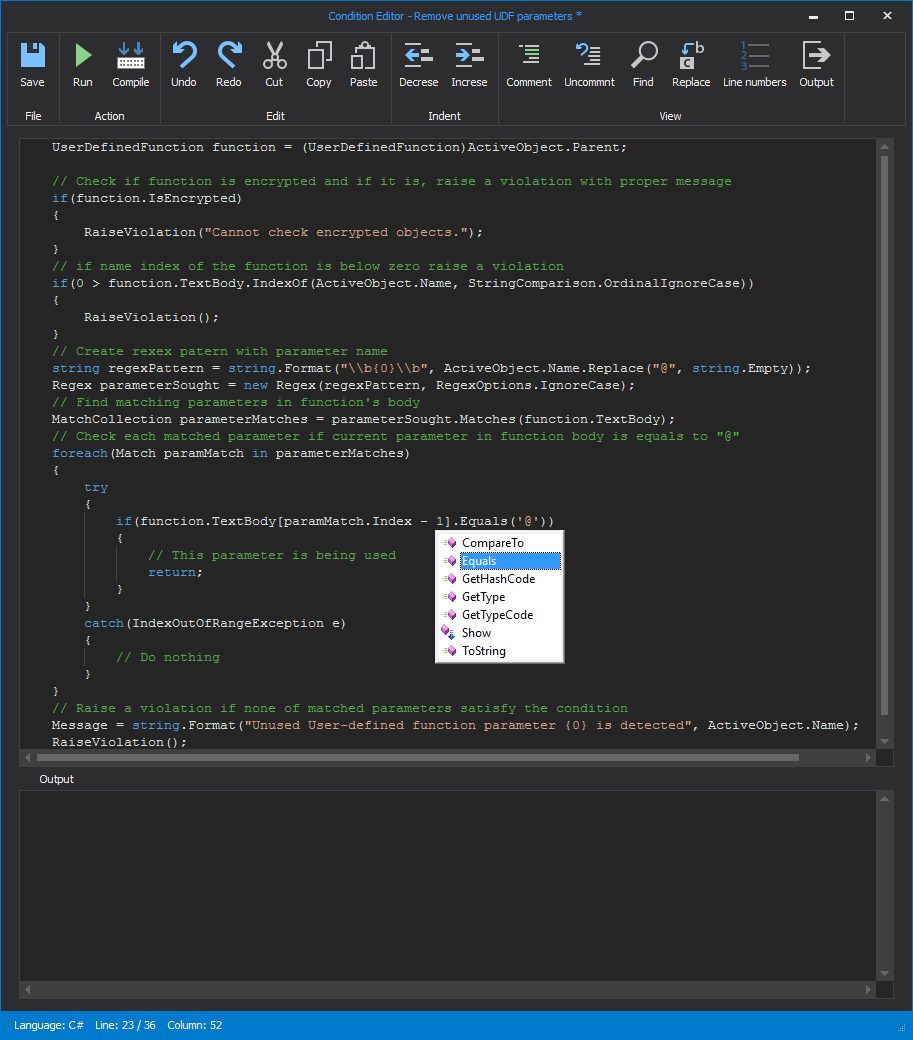 The purpose of script in ApexSQL Enforce rule is basically to evaluate the condition to a Boolean, and if the result is negative e.g. something bad exists, to raise a violation.

Conditions are self-contained scripts, in the programming language of your choice as long as it is C# and VB.NET. They can do anything any code can do although, at their simplest, they process a programmatic condition to return true or false, and based on that condition raise a violation. Violations are raised by calling a simple method RaiseViolation(). ApexSQL Enforce does the rest.

Here we show an example of a rule determining if a cursor exists in a procedure or not. If it does we’ll evaluate this condition to true and raise a violation, because we don’t like cursors and want to fail any procedure that contains them. 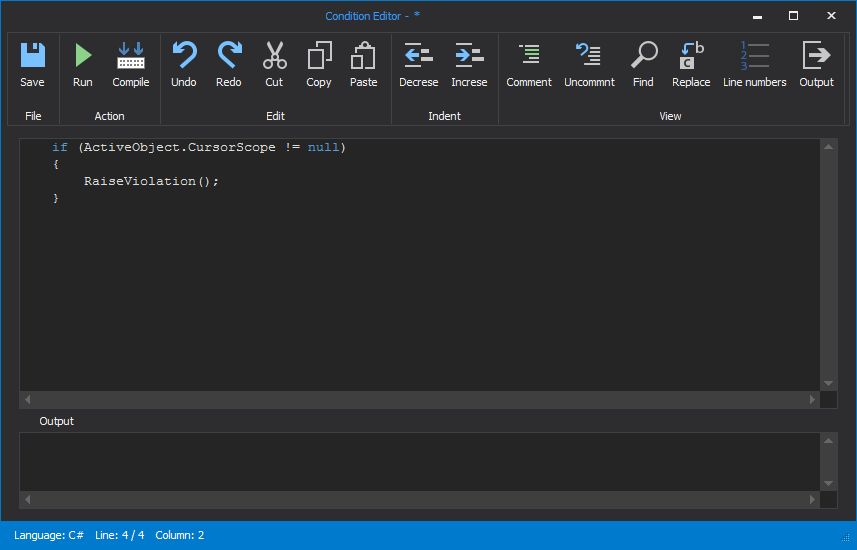 In this case, we will check for the existence of a deprecated element in a SQL script. If we can find it (returning a Boolean result of True) we will again raise a violation, failing the offending object, sub-object or script element. 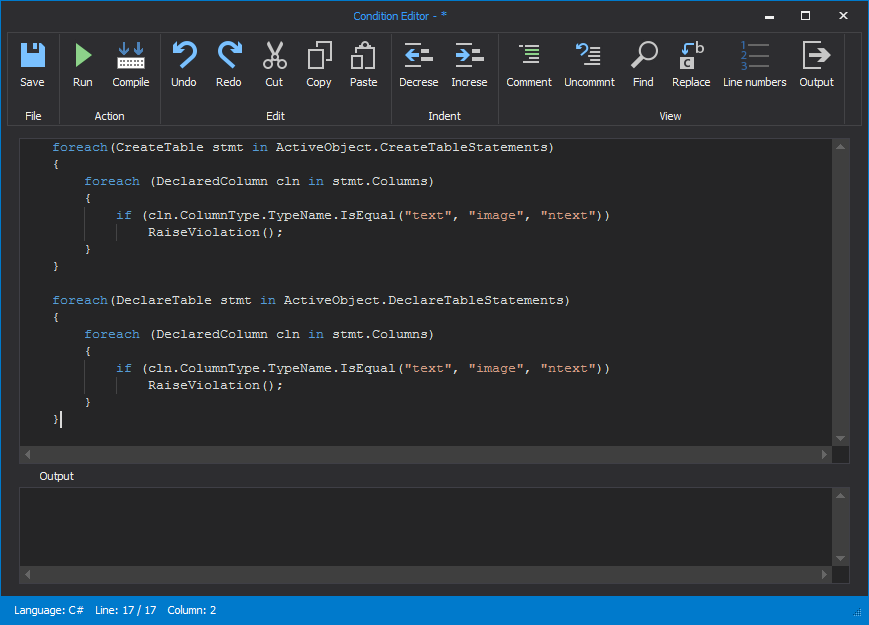 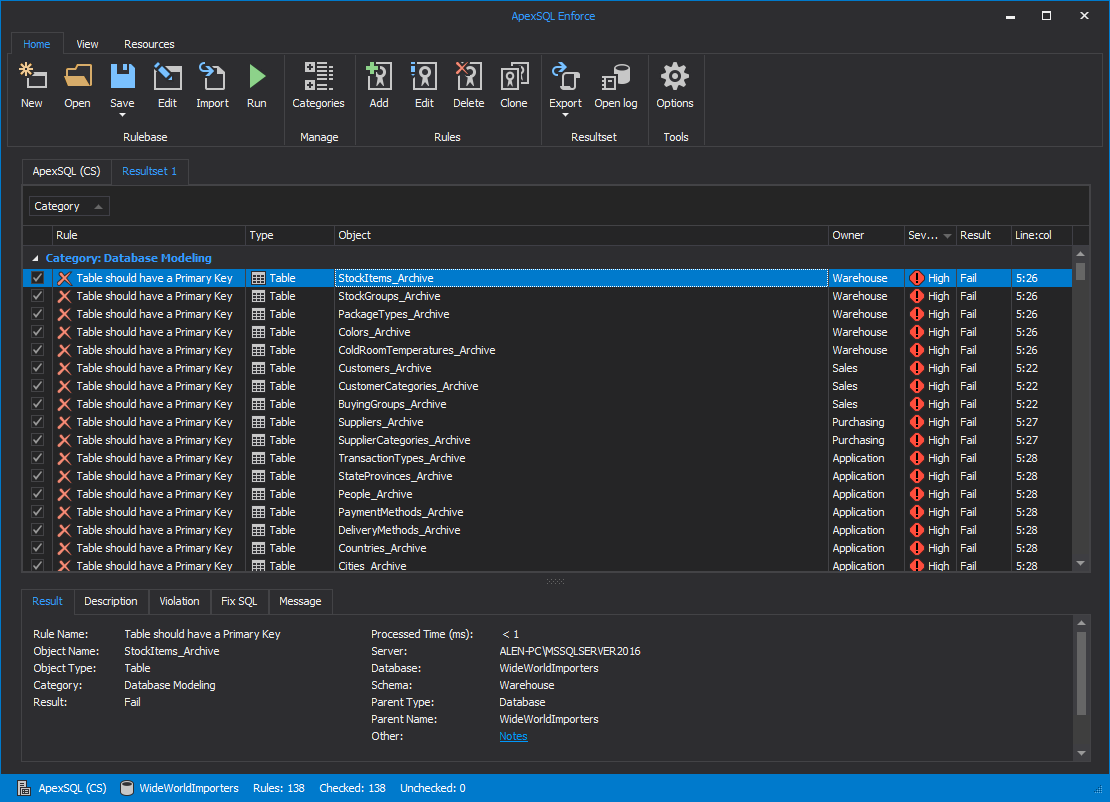 Conditions can do things like make direct calls to the database, executing SQL in case the information isn’t available via our API to get additional information: 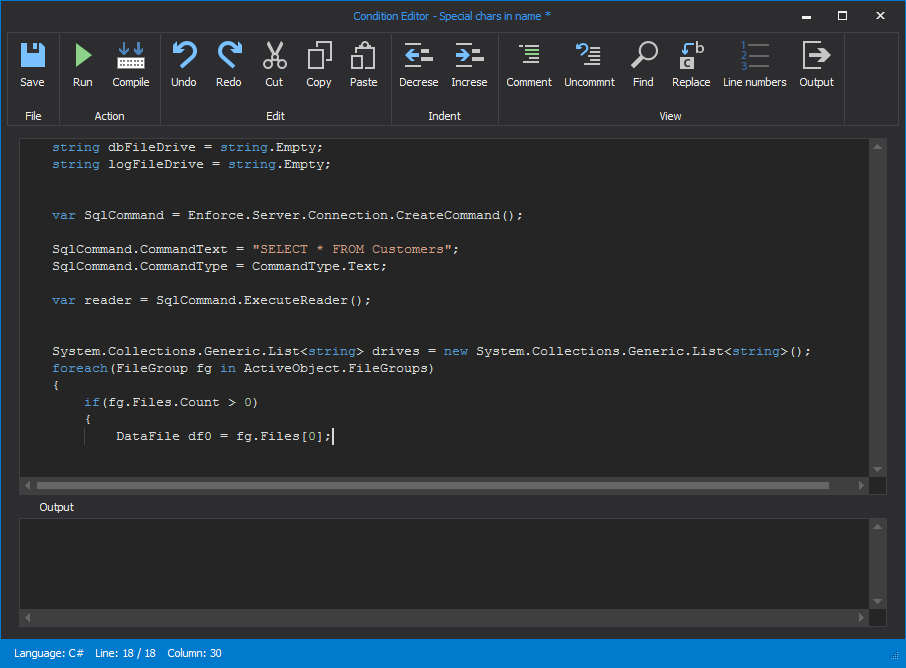 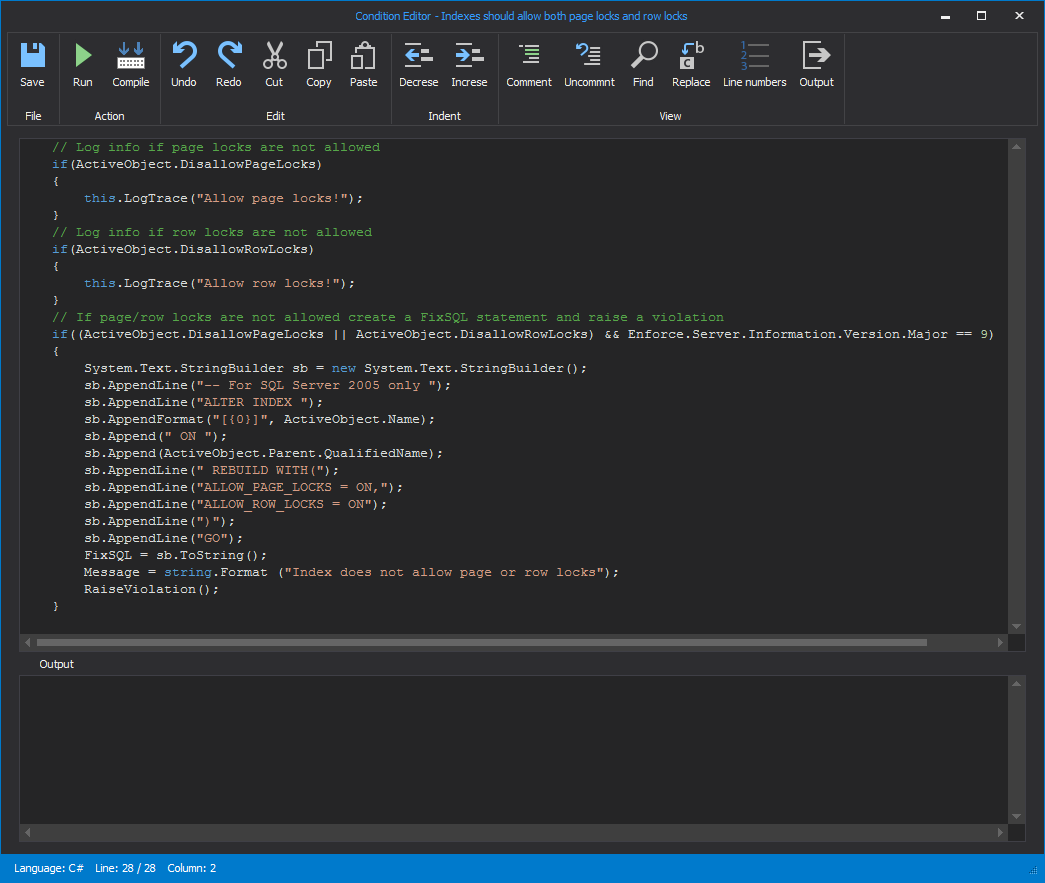 And even creating Fix SQL scripts to improve the condition of the database that violated a rule: 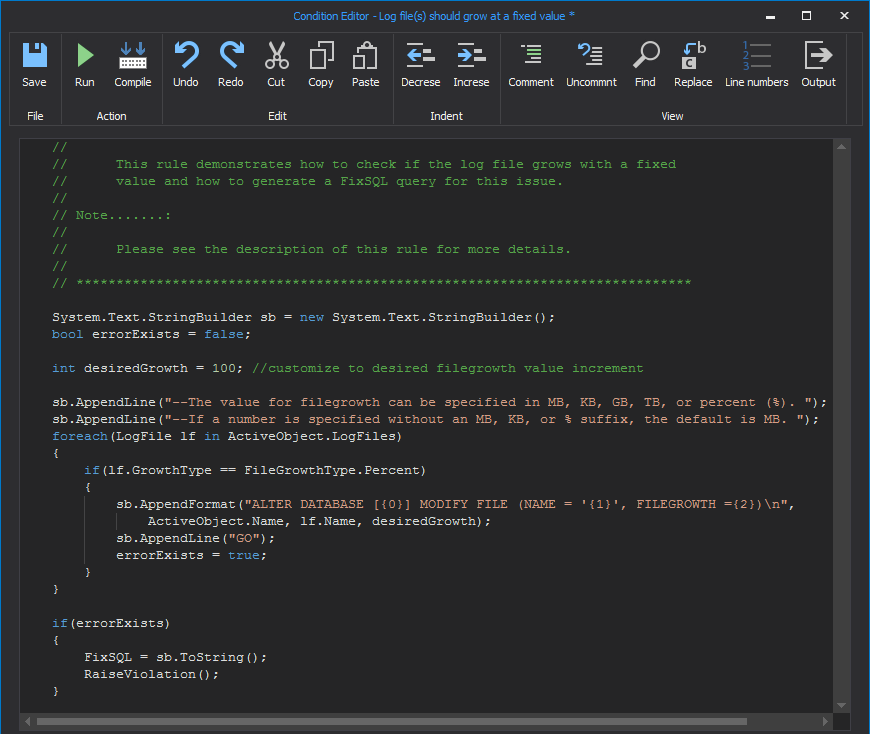 Now that we’ve covered the basic concepts of conditions, the rest is pretty easy. Rules have names, descriptions, and authors. A rule is designated a severity of high, medium or low. A rule must be designated with a type e.g. Table, to determine when it will fire as ApexSQL Enforce walks through its internal object model and encounters an object of that type.

Putting it all together

Rules can be created by clicking “Add” and all of the key attributes can quickly be filled in: 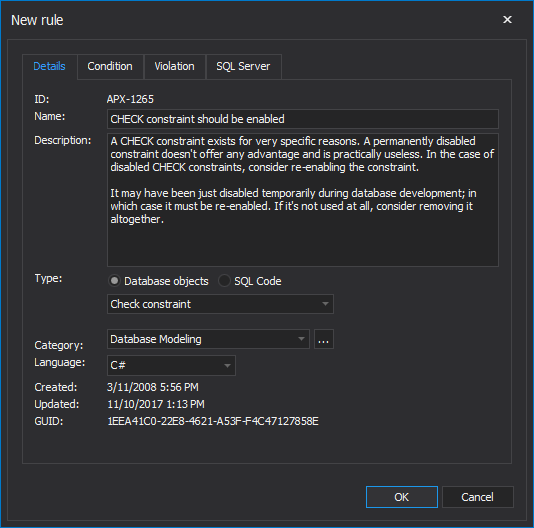 Then the condition can be written via the internal IDE to isolate the particular meta data element to evaluate, query its state and return a result of whether it passed or not. If OK, do nothing, and ApexSQL Enforce will treat it as successfully processed. But if not OK, raise a violation, and ApexSQL Enforce will consider the rule to have failed. 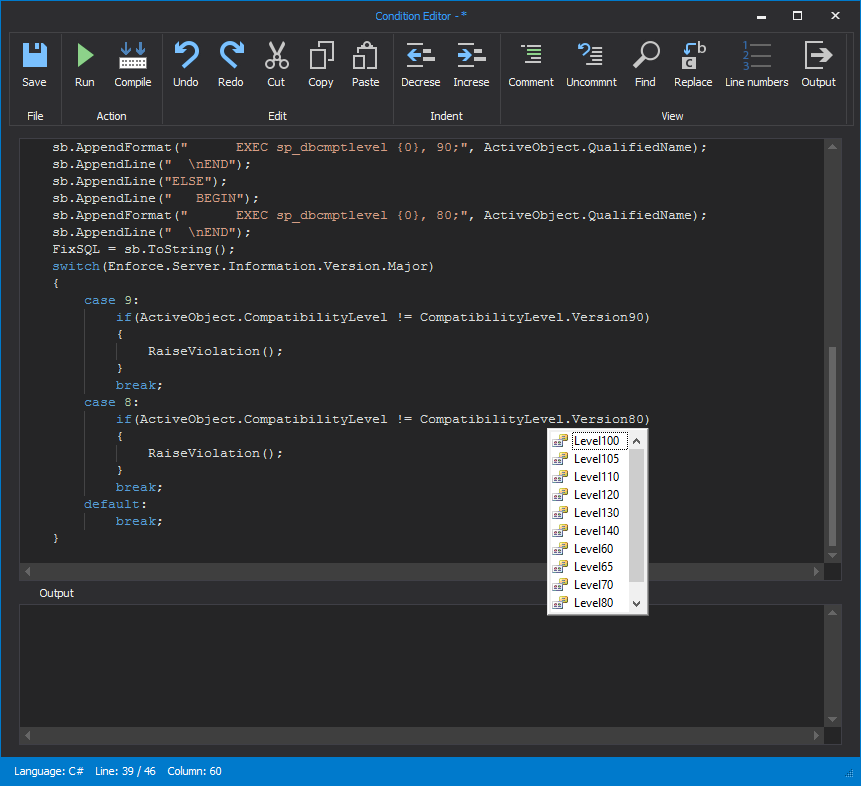 If we not only want to raise a warning but also fix the problem, we can programmatically create the “Fix” as in Fix SQL, that can be spooled to a larger script, after the job is complete, that can be run to address any and all offending issues detected by ApexSQL Enforce, amenable to such fixes. 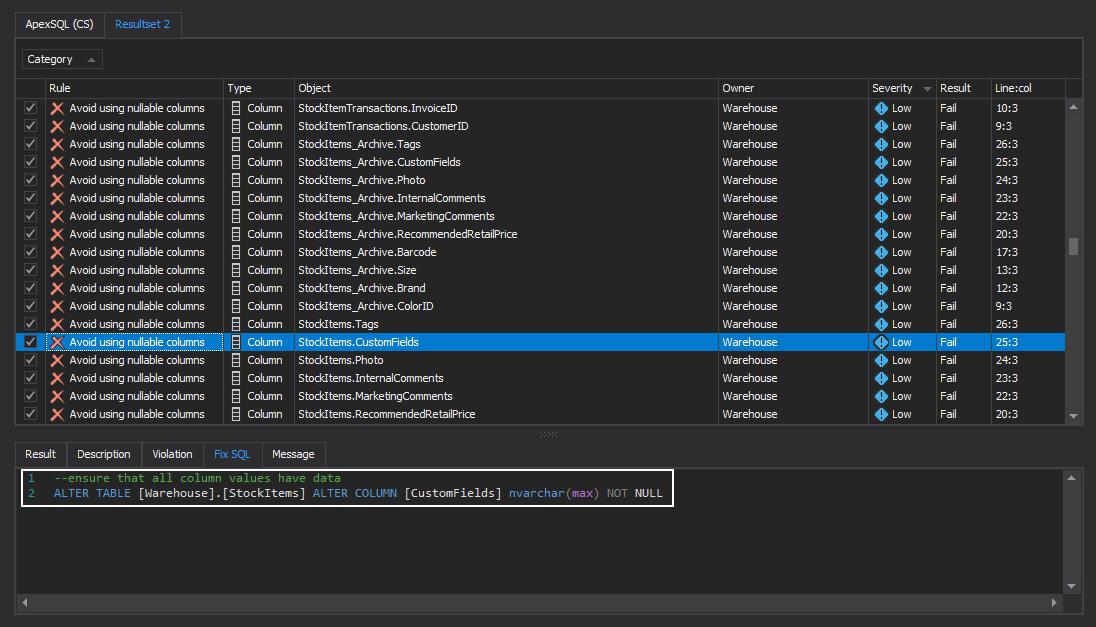