Summary
This article describes how to ignore rules and objects in ApexSQL Enforce.

In case the user wants to ignore results for the specific object (e.g. stored procedure) if for some reason a procedure can’t be fixed, changed or optimized in any other way, the rule that checks a procedure can be ignored. Rather than having to see the failed result repeatedly, it can be “ignored”.

By ignoring an object, results of executed rules will no longer show up as failed for that object. Instead, the status will be “ignore”. It can still be seen, to confirm that it was, indeed, processed but it won’t be included with results as failed and it won’t be included in aggregate categories for failed results and reports.

In other cases, you may have an object, that, for whatever reason, you want to exclude entirely from processing by any rules. ApexSQL Enforce allows the user to ignore an object entirely.

Ignoring results for the specific object

Before a result can be ignored, rules need to be run against a database or a SQL script. In order to ignore a result, after running checked rules, go to the Resultset grid, and right-click on a result which needs to be ignored. From the context menu, under the Ignore menu, choose the Ignore result command: 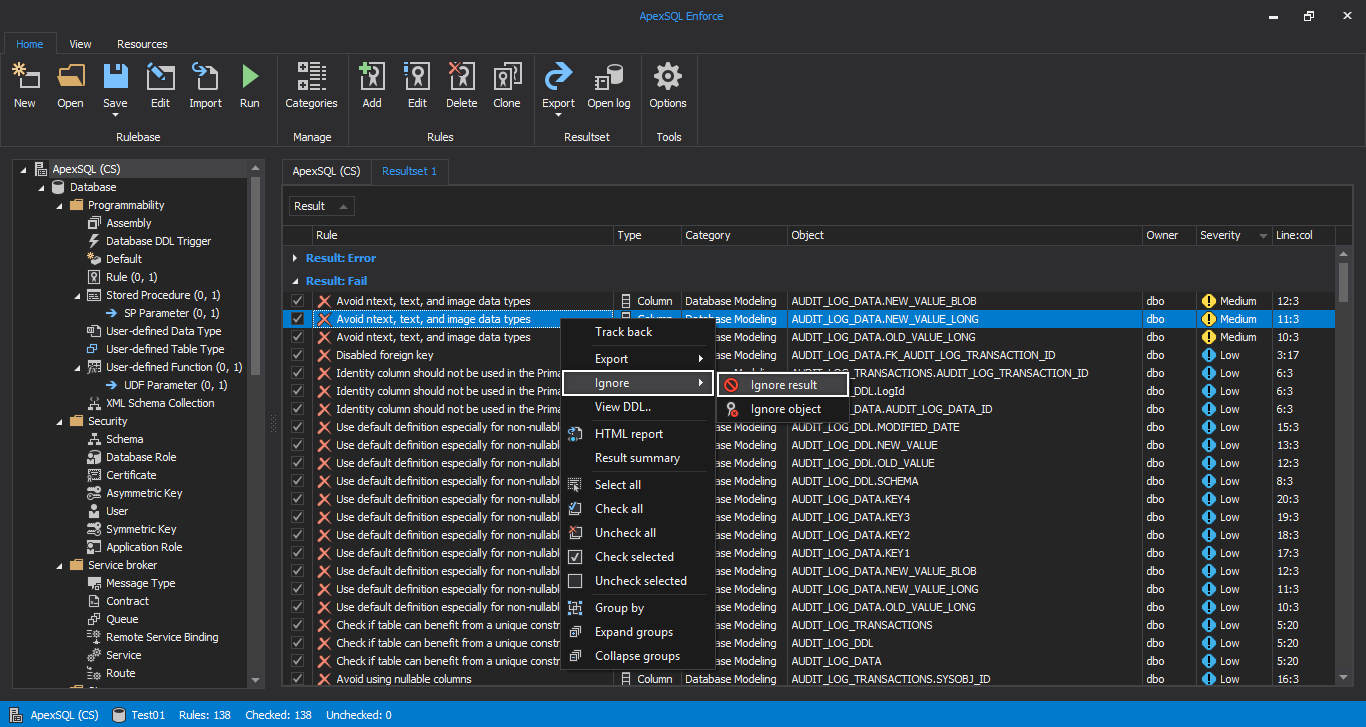 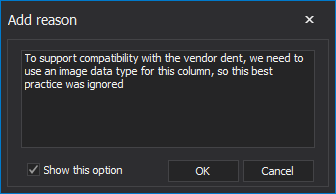 After the reason is specified, click the OK button. Now, the result will be moved under the Ignore result category in the Resultset grid. Also, its icon will be changed: 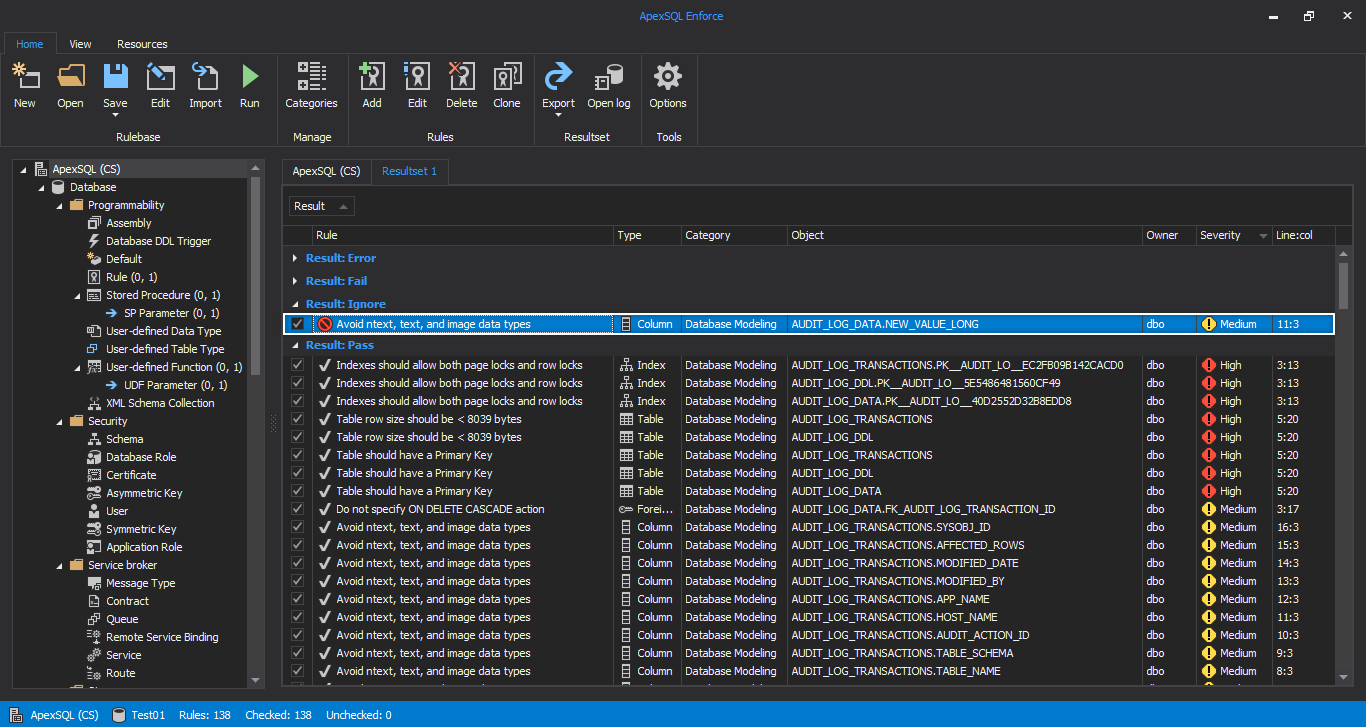 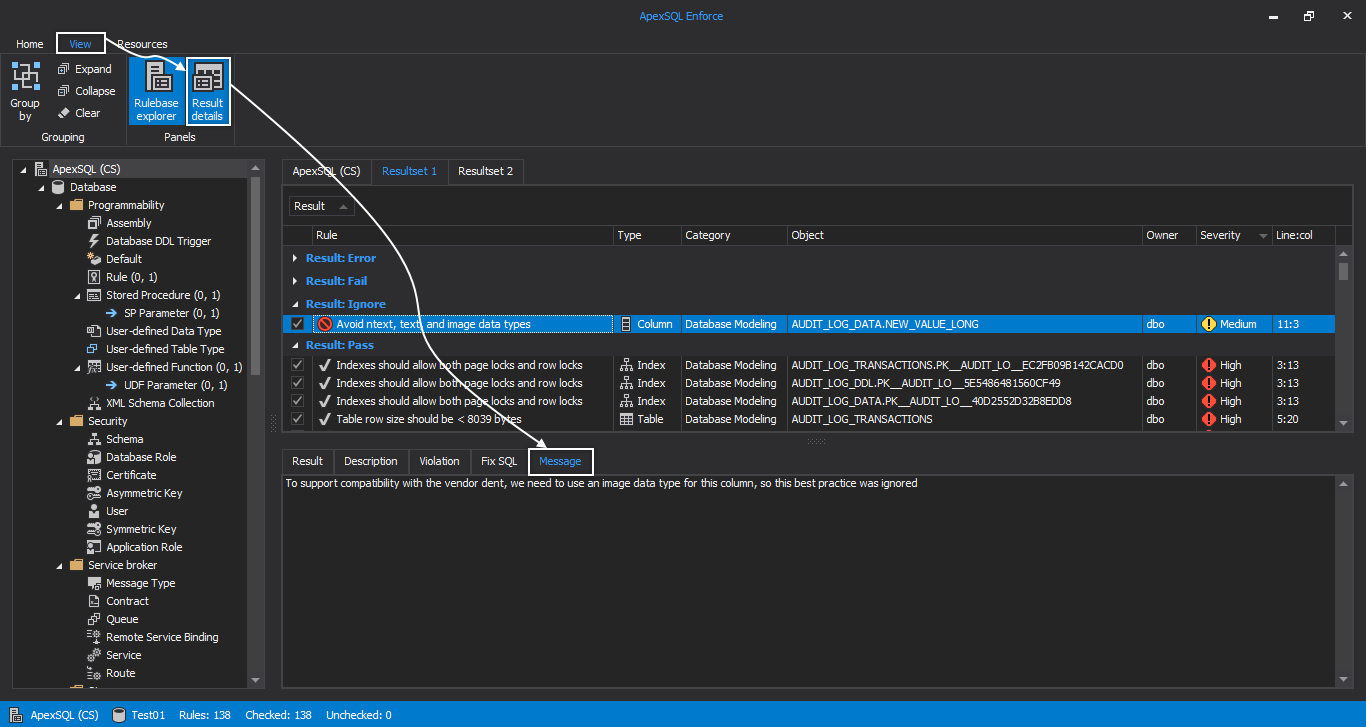 ApexSQL Enforce allows the user to ignore several results at the same time. To ignore results, press and hold the Ctrl keyboard key and select all results that need to be ignored. Right-click on selected results and from the context menu click the Ignore result command. Make sure that all results have the same ignore reason, since only one the Add reason window will be opened: 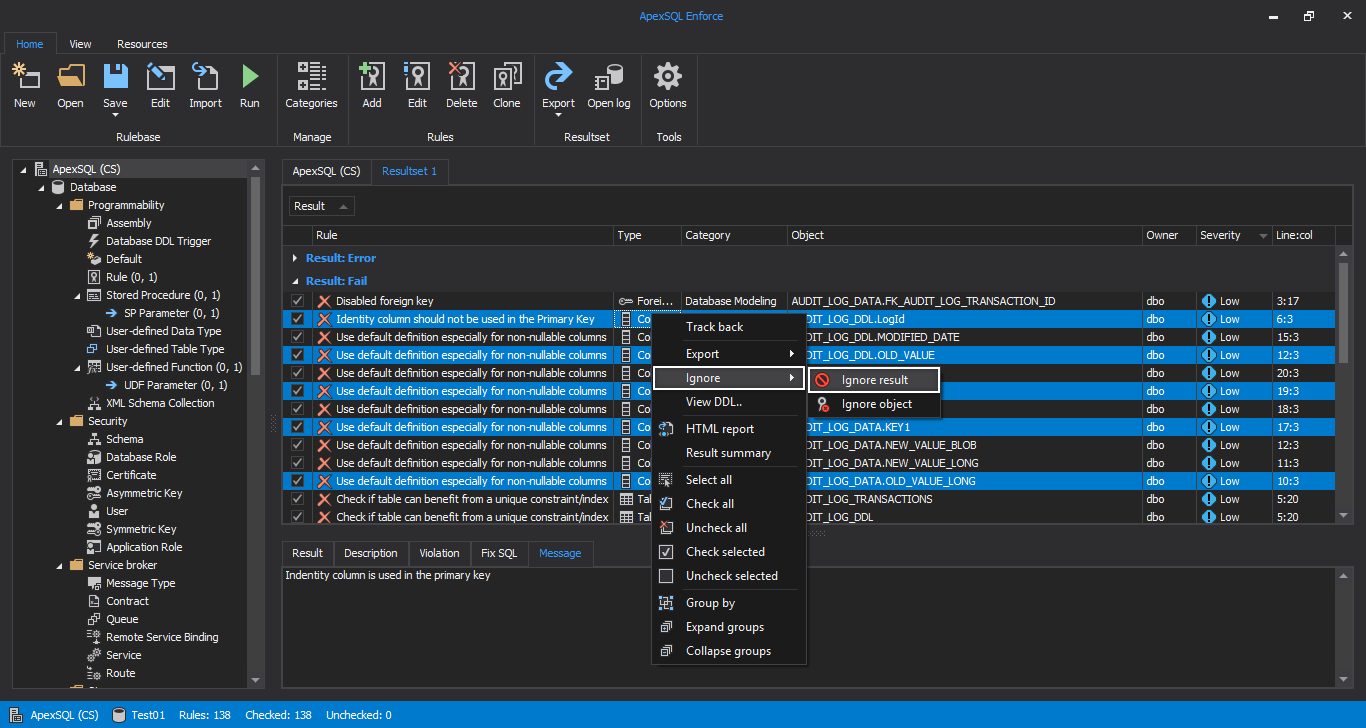 If for any reason, the Add reason window is not necessary to show every time a result or object need to be ignored, go to the Home tab in the main ribbon and click the Options command from the Tools section. Under the Results tab of the Options dialog, uncheck the Prompt for reason when ignoring the results? option. 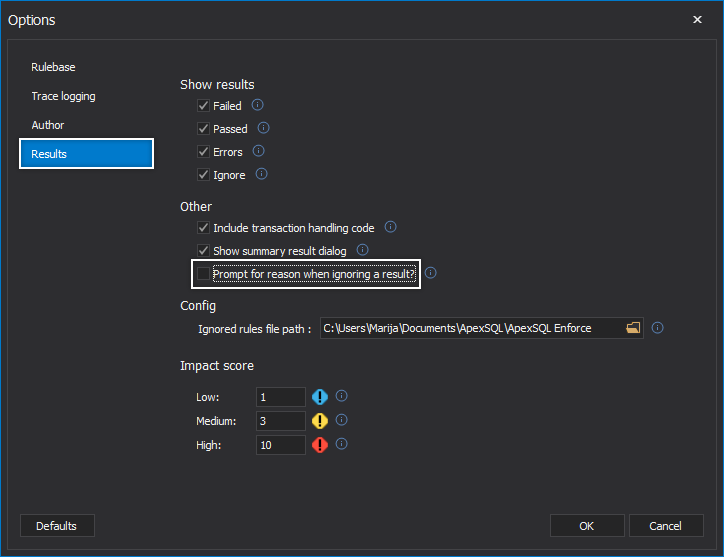 The next time result is chosen to be ignored the Add reason window will not be shown. 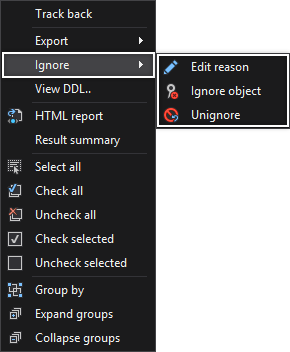 To change the ignore reason, click the Edit reason command. This command will open the Add reason window, where we can change the reason, if needed: 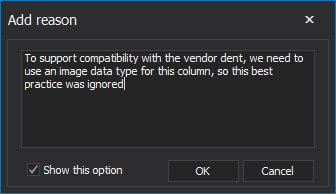 To ignore an object entirely, so no rules in the rulebase will be processed against it, simply select any result for that particular object, in the Resultset grid, right click on it, and from the context menu choose the Ignore object command: 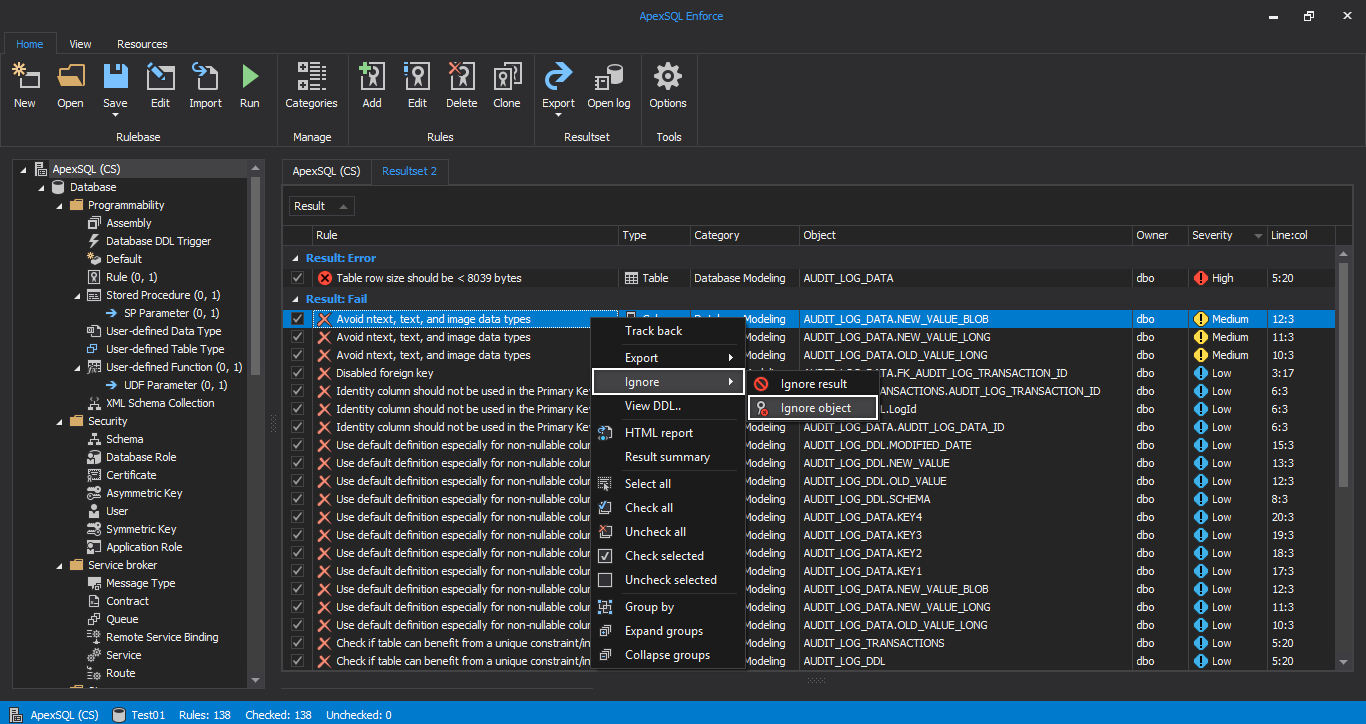 All results connected to the ignored object, will be moved under the Ignore result category: 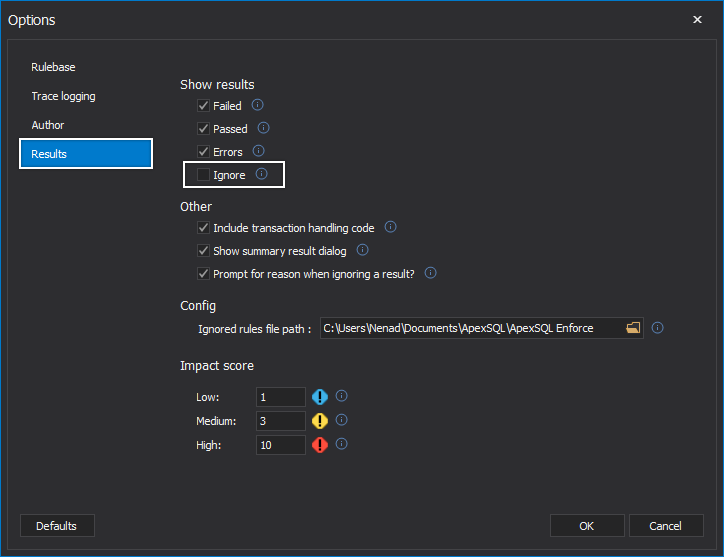 Another way to exclude the ignored items from the Resultset grid is to use the Result filter. In the right corner of the Result column header, click the filter icon. Check all other types of result but the ignore result type: 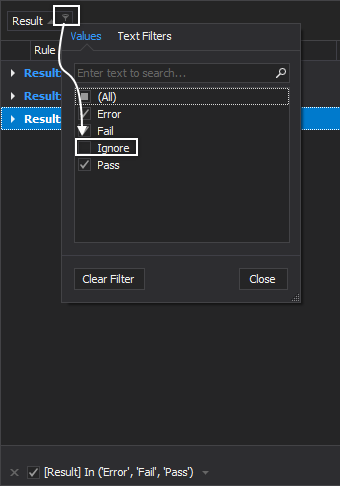 The list of ignored items is stored in the xml file, named by a database which has been processed, on the default location C:\Users\%user%\Documents\ApexSQL\ApexSQL Enforce. For every database, a new ignore file will be created.

If an ignore file is found, on the specified path, the application will produce the output “Ignore file [<database>.xml] loaded …” to allow verification that the ignore file was found and processed.

If on a specified location, no suitable file is found, the application will proceed without ignored items.

To suppress all ignored items to be shown using CLI, use the following switch/value combination

Q: Are the ignored items tracked in anyway?

A: The ignored items are tracked even when they are not shown in the Resultset grid. These types of information can be found in the Result summary window. 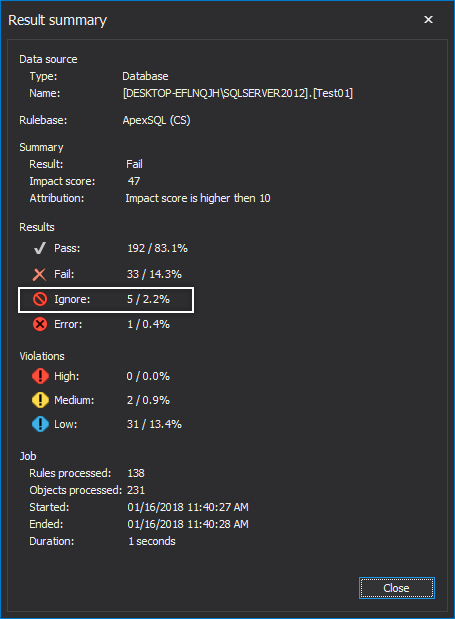 Q: Can the default Ignored rules file path be changed?

A: Yes, it can. In the Options dialog, under the Results tab you can specify any other path. Click on the Browse for folder button, and specify the new location for storing the ignore file for the database. 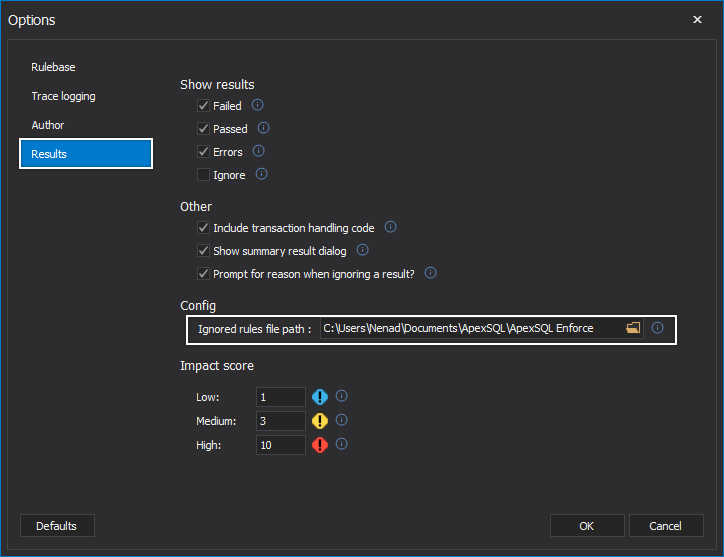 Q: Will the ignored items be remembered between sessions? 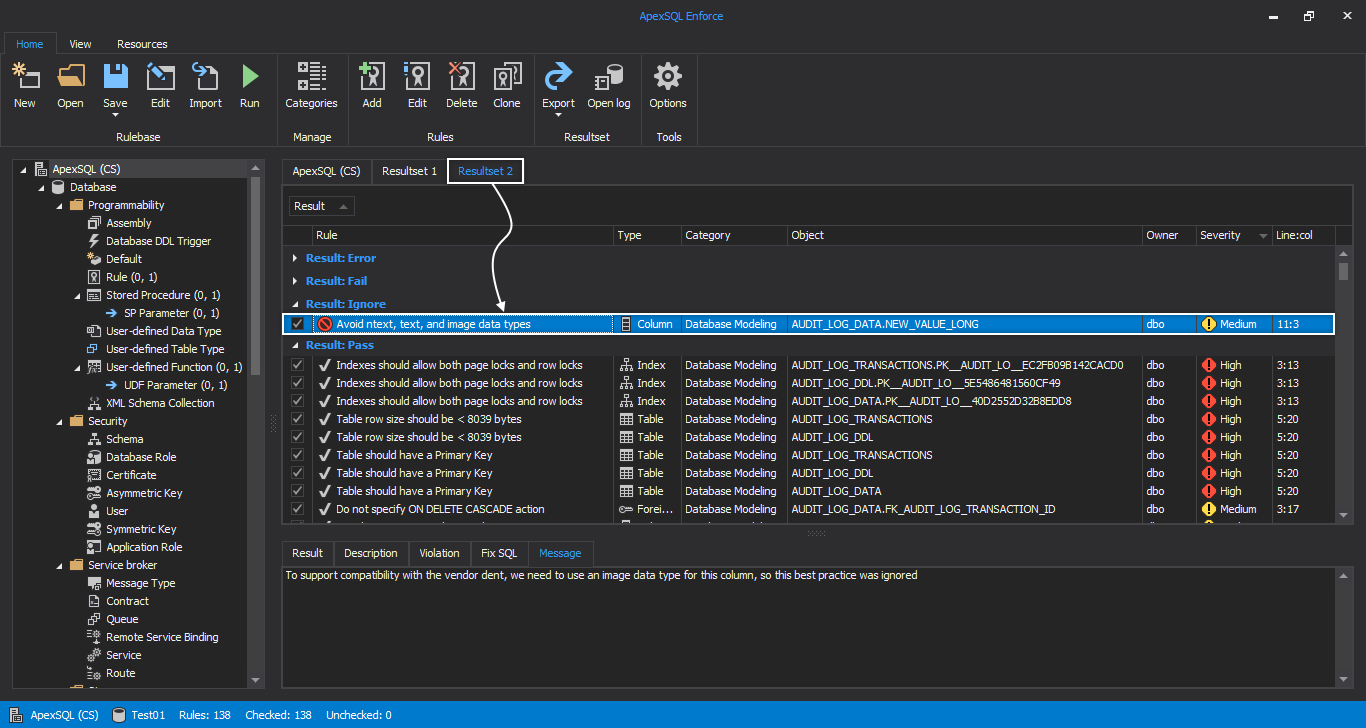