Summary
This article describes how to utilize branching and merging when Subversion is used as a source control system.

We’ll review the process of linking a database to a Subversion repository that has the default folder structure.

Next, we’ll create a new branch from trunk. In order to make a new branch active and to be able to commit changes, a database must be re-linked.

As the final part, we’ll merge changes committed to a new branch with the main branch. 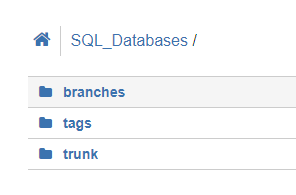 Linking a database to a main branch

We’ll link a database to a Subversion repository, specifically to the trunk folder. In order to do so, the trunk folder will be set as a project in the last step of the Source control wizard: 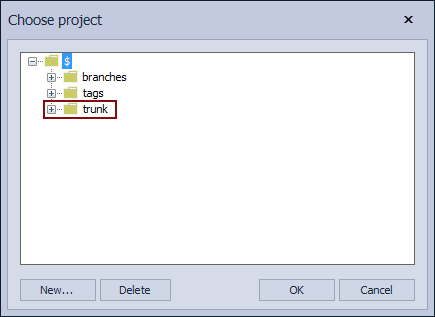 After a database is linked, let’s initially commit all objects to the previously selected trunk project:

We’ll made additional change that will be committed to the trunk project before creating a new branch. The following script is used to make a change:

We’ll commit this to the trunk project:

Assuming that after committing a change related to the Address table a database reached a point where it can be promoted to other environments, we do not want to break this by commit each and every new change to the trunk project. Instead, let’s create a new branch where all additional changes will be committed.

In order to create a new branch, right click a database and choose the Create branch option from the More source control option context menu: 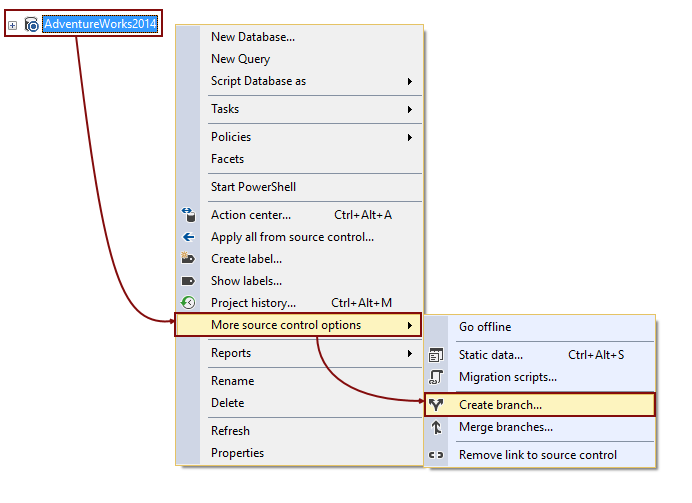 This initiates the Create branch dialog. As shown in the image below, the Source filed contains the current active project which is the trunk project. This cannot be changed since the currently active project is pre-defined as a source branch: 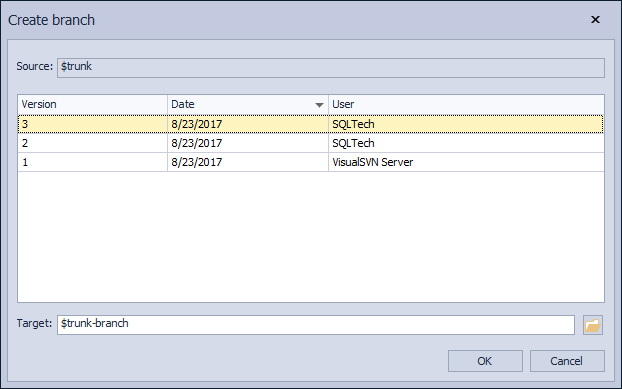 Below the Source field is a list of changesets committed to the trunk branch. The bottom one, “VisualSVN Server” is a generic changeset, created by VisualSVN application when the repository is initiated. The middle one, “SQLTech”, represents the initial commit and the one on top, “SQLTech”, represents the most recent change that is committed, related to the Address table.

For instance, let’s assume that we do not need the most recent change, where the Test column is added to the Address table, in a new branch. We’ll select the middle changeset that represents the initial commit without any additional changes:

The Target field is where we need to specify a new branch. By default, a name of a new branch is a combination of the source branch followed by the word “branch”. This can be changed to anything else.

Since we have a separate folder inside the repository that will hold only branches, let’s use the Browse button to navigate to the Branches folder: 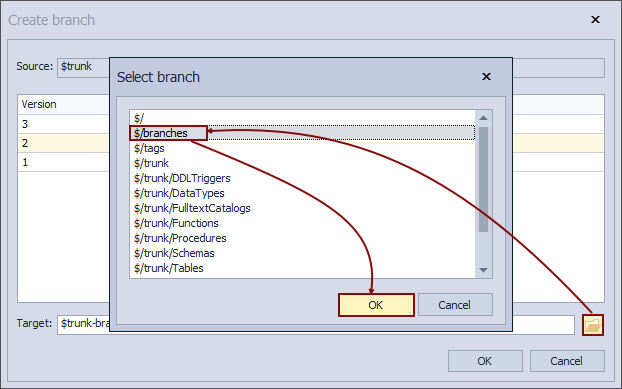 We’ll specify Feature1 as a name of a new branch.

Once we have everything set, clicking the OK button will create the specified branch. When the process is finished, a validation message appears:

Let’s explore the repository directly, to check the newly created branch. As shown in the image below, the same structure that exists in the trunk project is copied to the Feature1 folder, under the Branches folder: 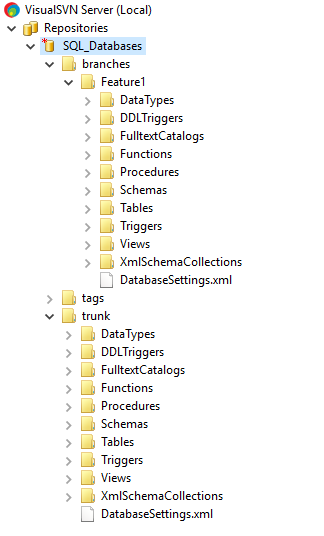 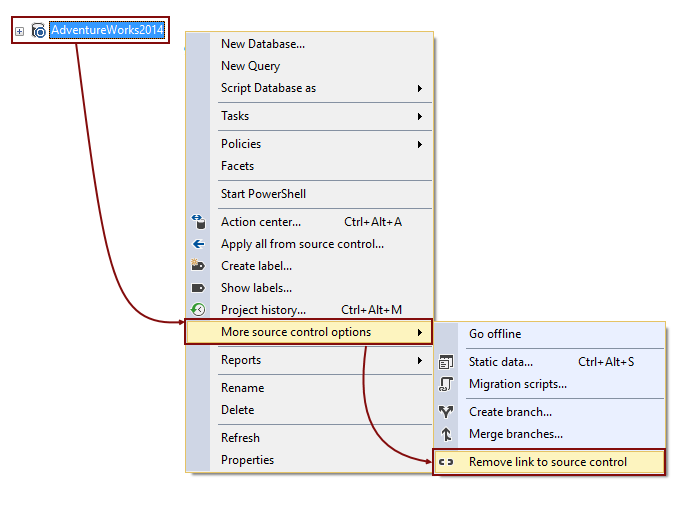 Repeat the linking process in the same way as for the initial linking. In the final step of the Source control wizard, it is important to switch to the newly created folder, Feature1 under the Branches folder: 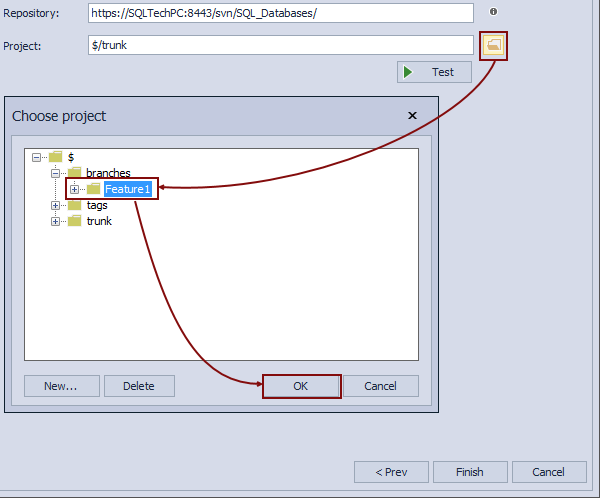 Let’s create an additional change in a database that will be committed to the Feature1 branch. The following script is used:

We’ll provide the commit message and click the Apply button to commit this to the Feature1 branch:

Now that we have a change committed to the Feature1 branch and that does not exist in trunk, let’s merge these branches.

In order to merge changes committed to one branch with other branch, right click a database and select the Merge branches option from the More source control options menu: 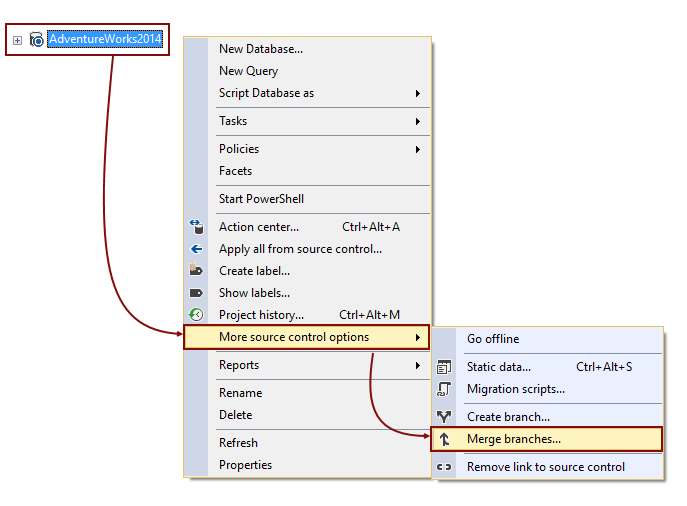 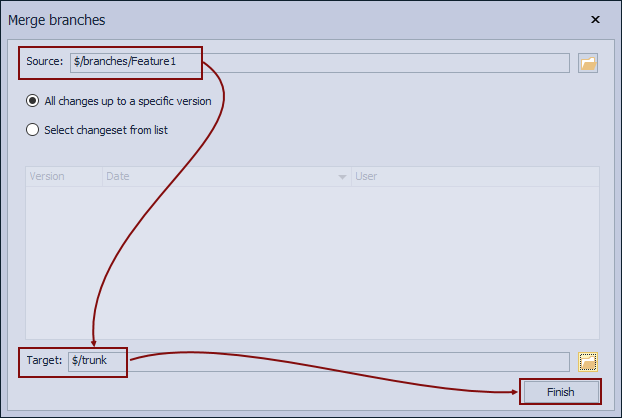 We’ll leave the All changes up to a specific version option checked as we want all changes from the Feature1 branch to be merged. Similar to the process of creating branches, specific changesets can be selected to be the last one that will be merged along with all the previous changesets with a target branch.

As a result, we should have a database synced with source control regardless of the selected branch. Let’s check this while the feature1 is the currently active branch:

After relinking a database to trunk and initiating the Action center tab, the following is shown:

Since no differences are detected, we can confirm that the merging process was successful.