Summary
This article describes how to utilize the Branching feature when Team Foundation Server is selected as a source control system.

Since branching in Team Foundation Server means creating a new folder (project) for a new branch and copying all the content from the initial folder to a new one, we’ll cover the process of linking a database to a folder (Team Foundation Server project) that will be treated as the main branch.

After that, we’ll create a new branch from the initial one. In order to access the new branch and to commit changes to the new branch, a database must be re-linked. We’ll shown how that works, as well.

At the end, we’ll merge changes from two branches and verify that everything is merged successfully by comparing a database with branches that were previously merged.

By creating a branch, the user creates a folder (project) inside the repository that contains all the content from the initial branch that is used as a source.

Let’s check how to organize the folder (project) structure on a repository. If a repository is empty, we can create a folder in the root called Databases. In order to do that, browse the repository in the final step of the Source control wizard and choose to create a new project: 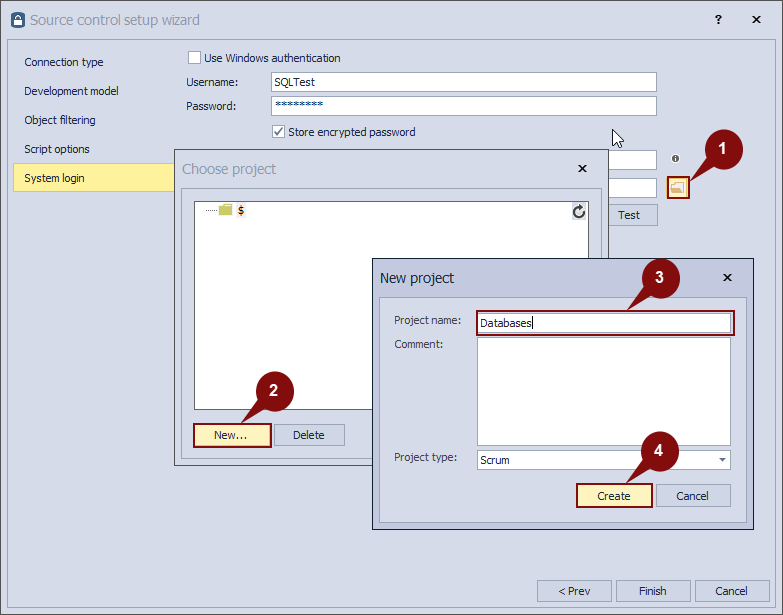 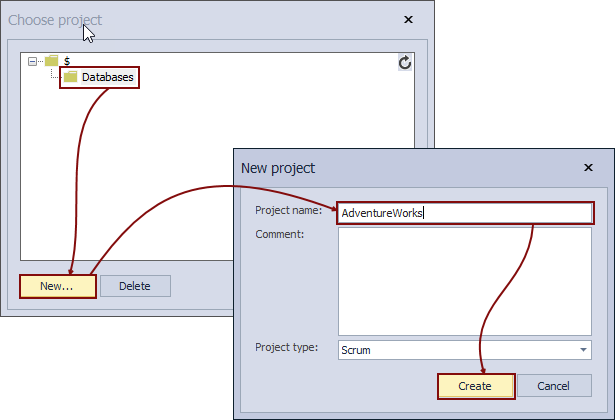 Now that we have a separate folder for a database we want to version control, one folder that can be used as a main branch, and another folder where we’ll keep all branches. We’ll name the first one Main_Line and the second one will be the Branches folder. We’ll repeat the process of creating a new project in order to achieve this: 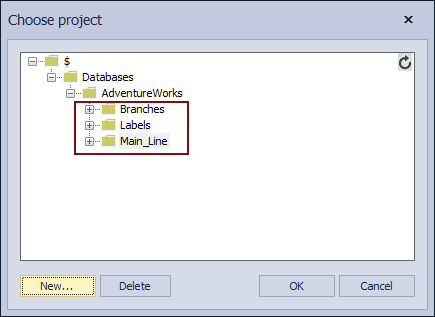 After a database is linked, let’s initially commit all objects to the Main_Line project:

Now that we have a database initially committed, let’s create a new branch where new changes will be committed. This way we’ll simulate the workflow of having a mainline that is tested and that is in a working state. Therefore, we do not want to simply commit each and every change to a main line. For that reason, we’ll create a new branch that will contain the exact same objects that exist in the main line as well. However, we can commit as many changes as needed to another branch without affecting the mainline. Later, when changes from any other branch are tested and verified, we can merge them with the mainline.

In order to create a new branch, we’ll right click a database and choose the Create branch option from the More source control options sub-menu: 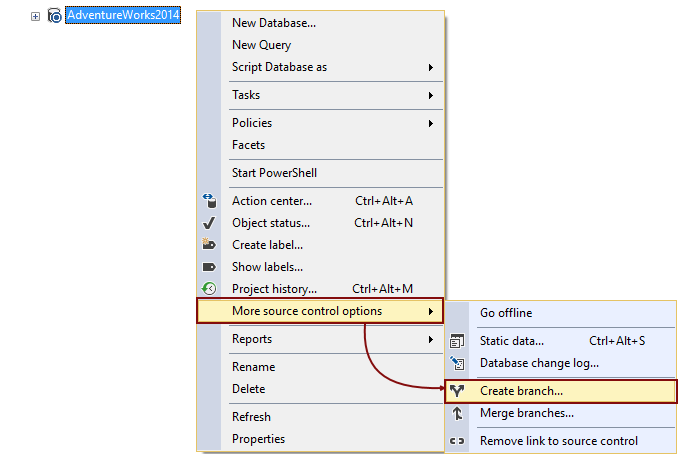 This initiates the Create branch dialog. The Main_Line project will be set by default in the Source field and this cannot be changed. Besides the Source field, a list of changesets committed to the Main_Line project will be shown. In this specific case, lower changeset represents a generic entry created along with a project creation. A changeset on top represents the initial commit of all objects:

The “Target” branch represents a new branch that will be created. By default, a new branch will have a name of the Source branch followed by the word “branch” (in this case it is Main_Line-branch). This can be changed to any other name that describes the purpose of creating a new branch.

Creating a new branch means creating additional project. Knowing that we have already created a separate folder called Branches to keep all new branches, we’ll specify that in the Target field and in the Branches folder we’ll create another one that represents a new branch called Feature01: 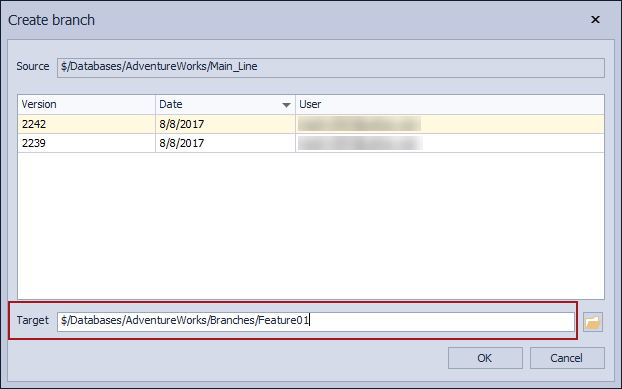 By doing so, we’ll have everything from the Main_Line branch copied to the Feature01 branch. When this is set, clicking the OK button will create the specified branch. As a result, a confirmation message appears:

To verify that a new branch is created, let’s switch to a repository directly and to look for what is stored in the Branches folder: 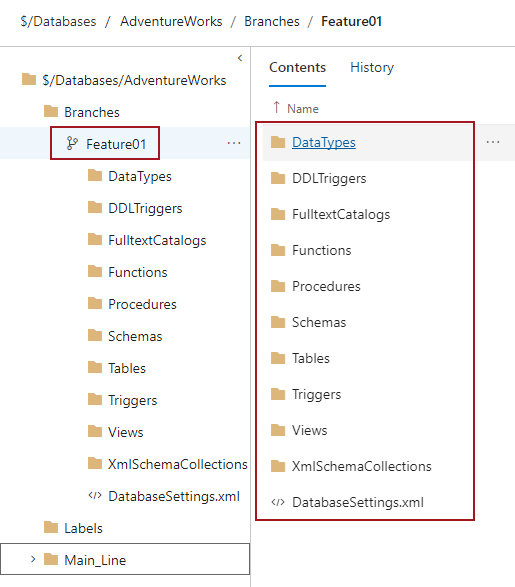 As shown in the image above, a new branch called Feature01 is created and the entire content is copied from the Main_Line branch (all the folders with subsequent files). In order to verify that all the content is copied, we’ll need to switch to the Feature01 branch. If the Action center tab shows no changes, it will be a confirmation that a new branch is successfully created.

To switch to a new branch, a database must be unlinked from source control (unlinked from the current branch), and re-linked to a new project (folder) that represents a newly created branch. This is a mandatory step when switching between branches when using Team Foundation Server. 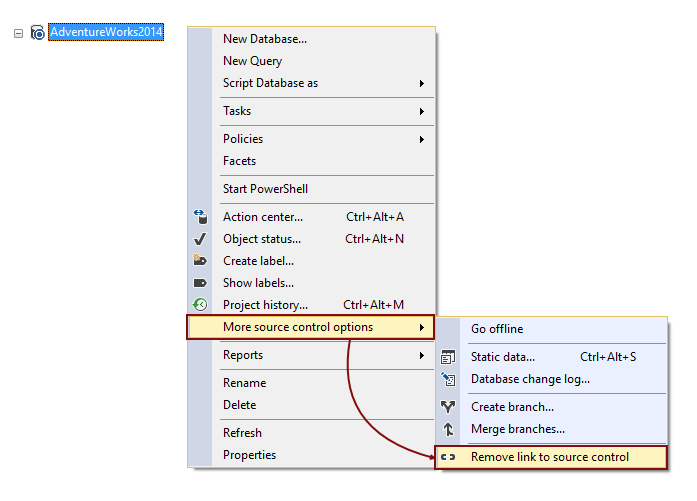 After that, link a database again, but in the last step of the Source control wizard, choose a new branch (folder) to link a database to. In this case, we’ll find the Feature01 project, inside the Branches folder: 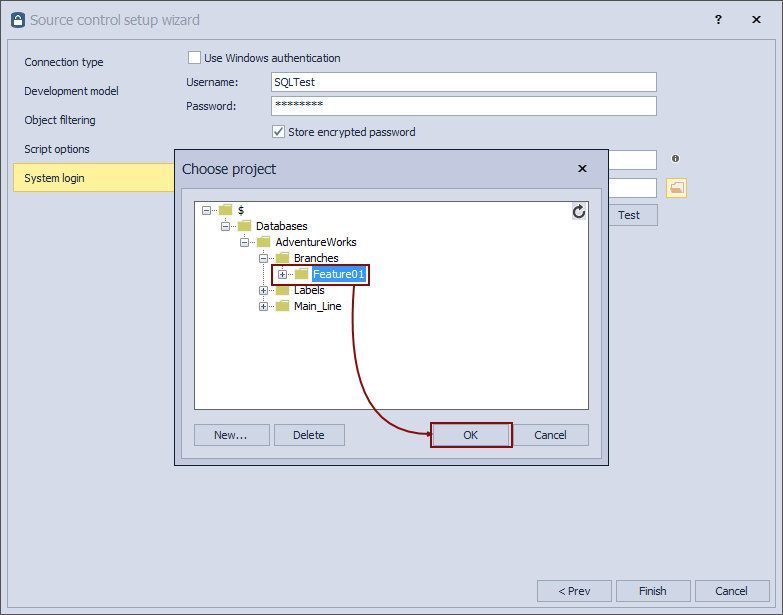 Now that we have the correct project set, we’ll link a database. After the Action center tab is loaded, it shows no differences:

Let’s make a sample change and commit it to the Feature01 branch. We’ll use the following script:

We’ll commit that to the Feature01 branch:

When a change is committed to the Feature01 branch, let’s merge that change with the Main_Line branch. In order to merge branches, right click a database in the Object Explorer pane and from the More source control options sub-menu, select the Merge branches option: 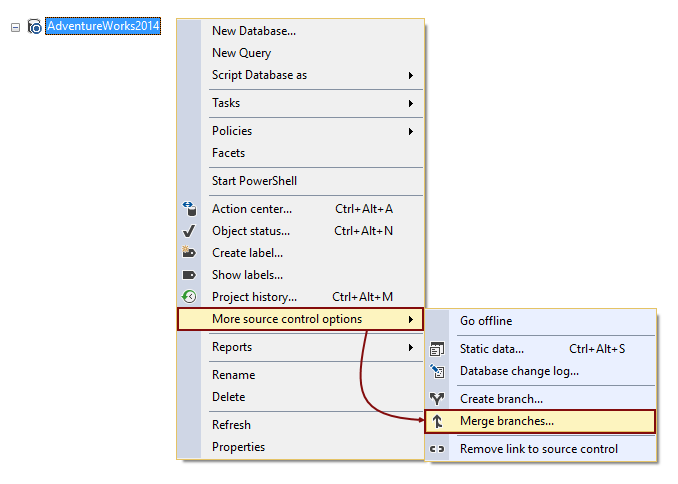 This initiates the Merge branches dialog: 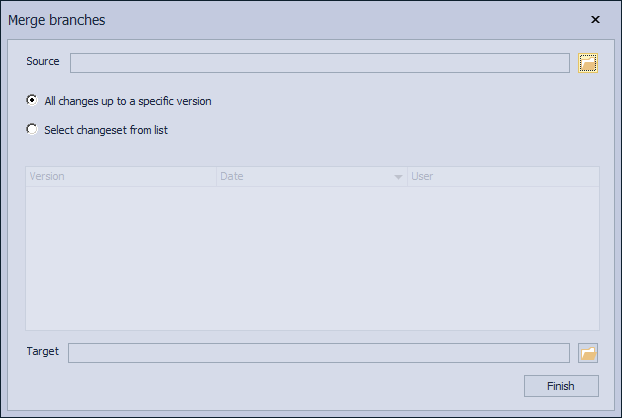 Browsing through a repository, source and target branches can be set. We’ll use the Browse button to select a source branch first. This is a branch which changes will be merged (copied) to a branch selected as a target. In this case, we will use the Feature01 branch as a source: 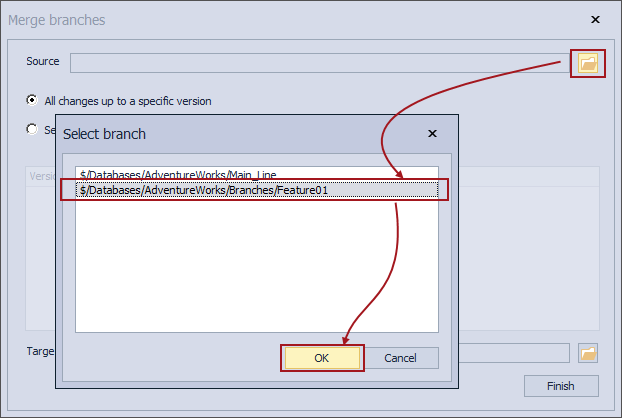 Similar to the process of creating a new branch, choosing a source branch gives a list of committed changesets to the selected branch. Since we want to merge all changes, the All changes up to a specific version option will be checked: 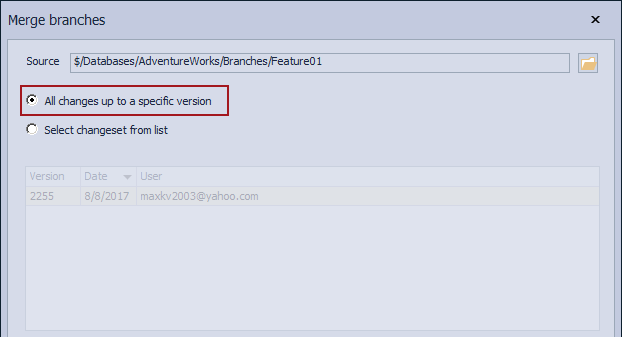 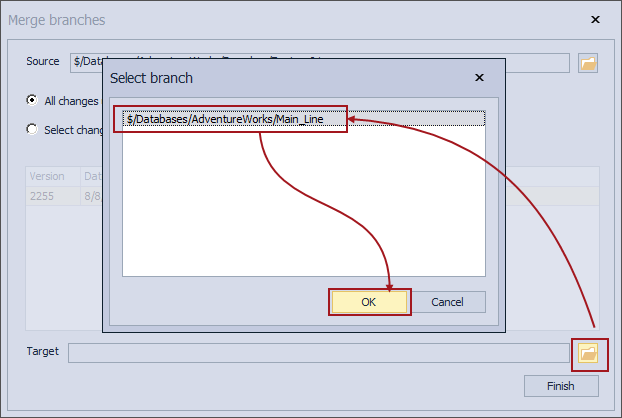 By clicking the Finish button, specified branches will be merged.

To confirm that the merging process was finished successfully, let’s re-link a database to the Main_Line branch. After re-linking and initiating the Action center tab, no differences are shown:

This means that whatever was committed to the Feature01 branch now exists in the Main_Line branch.