NuGet package is a recommended way to move and deploy projects through DevOps infrastructure for database and other types of projects. It is a Microsoft based solution that is especially convenient when said infrastructure contains different environments like development, QA/testing or production environment.

Another feature that comes with NuGet packages is project versioning and it is a native part of the NuGet file naming principle.

For creating, handling and moving NuGet packages across environments several methods can be used. NuGet package handling is natively supported in Visual Studio as Package Manager extension or a standalone NuGet utility can be used for this purpose and all that is functional in conjunction with NuGet repository solutions.

Every step, when executed, provides some kind of output artifact, whether that is an execution summary, review report or some type of SQL script (e.g. build script, synchronization script, etc.). Outputs are stored in a folder which location can be customized within available options:

Output artifacts could not necessarily be stored in a NuGet package. For that purpose, the “Include output in package” option exists in every step that generates some output. Database deployment best practices indicate that every artifact should be stored in a package, therefore, this option is checked by default when starting a new step configuration.

If “Include output in package” is checked, a NuGet package file definition will be required. This is done in the Data sources section with selecting the NuGet data source type: 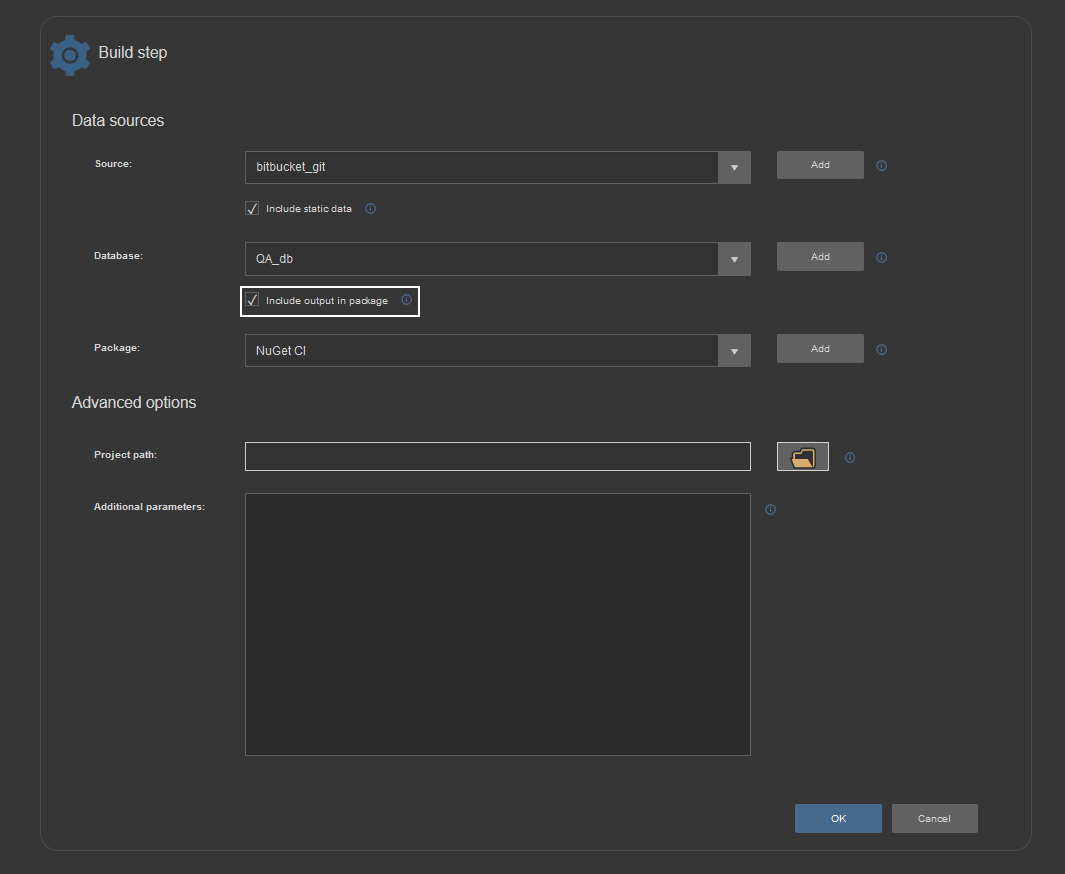 A NuGet package file definition is created as the data source. The configuration requires only the package ID (with data source name identifier), without the package version number:

The version number will be automatically assigned based on the pipeline build counter settings: 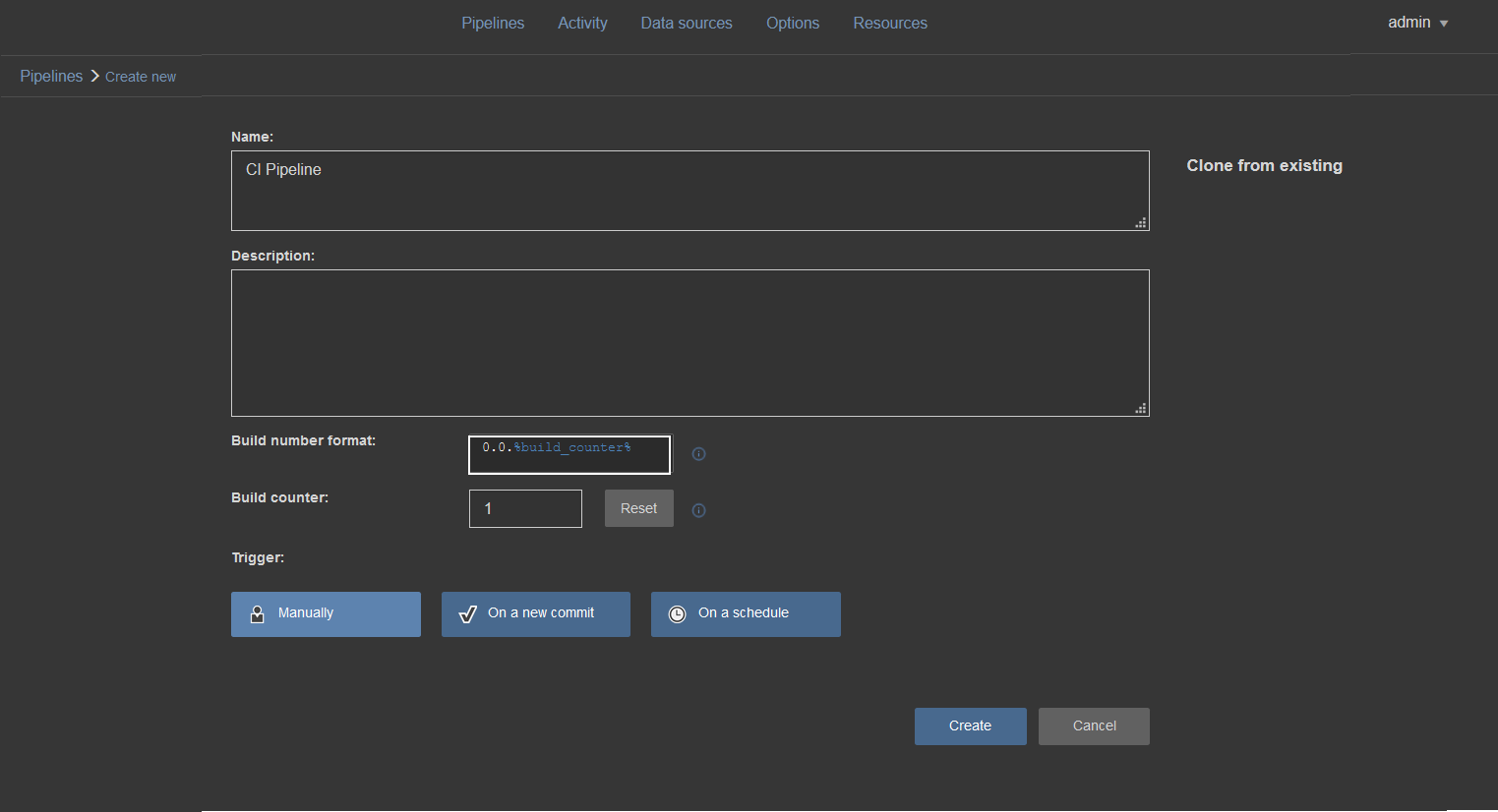 After the NuGet data source is created it can be consumed in a step if “Include output in package” is checked: 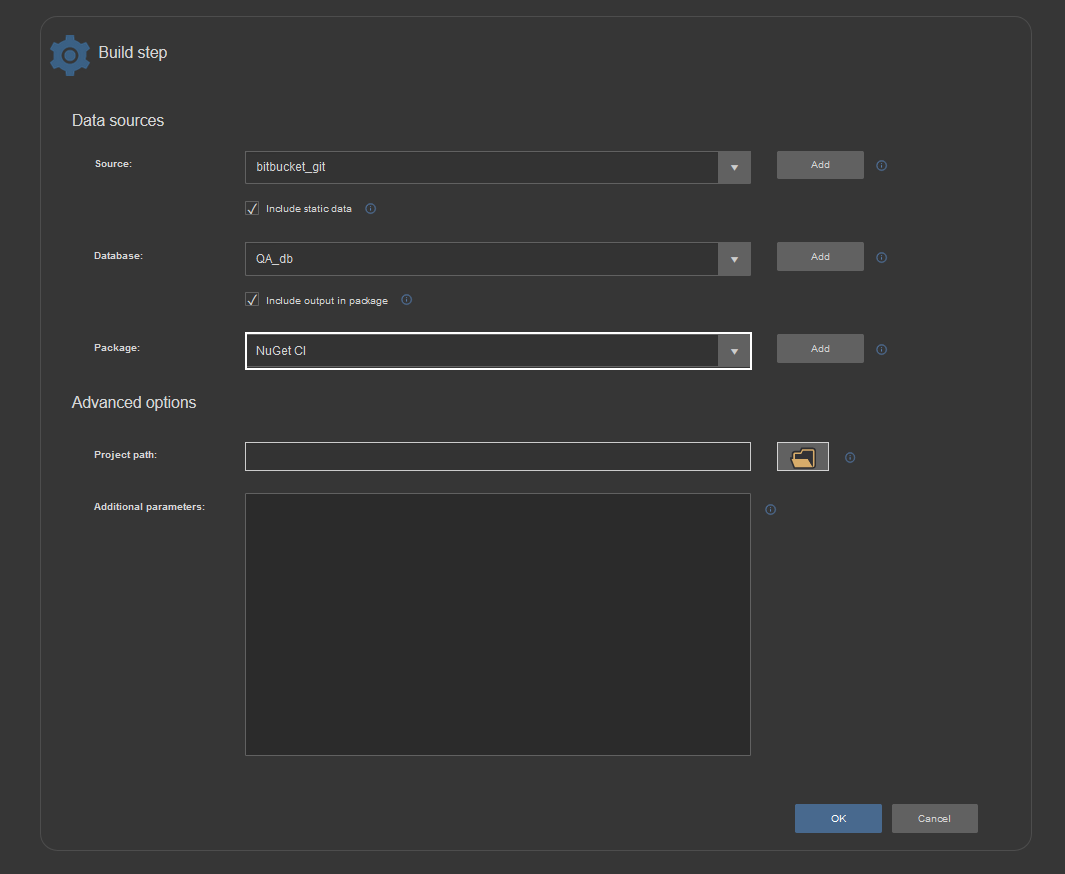 All steps provide relevant information as outputs that will help review a project workflow and troubleshoot issues. Creating and relaying a NuGet package with this information to a relevant person can be quite an organizational perk.

While working with a continuous integration pipeline the steps dedicated for this pipeline and their outputs would be:

Build step – builds a database from a provided source and outputs a Build summary (BuildSummary.txt) and a build SQL script (%data_source_name%_Build_script.sql). Build summary contains source and target connection messages generated by the ApexSQL Build tool and a set of SQL engine messages relative to executed SQL statements from the build script.

Populate step – generates synthetic test data to populate tables created with the Build step. It outputs information (Populate_summary.txt) about which tables are populated, with how many rows and if there are any issues encountered during the population test. It also creates a synthetic data population script in case it needs a review to check what kind of data was generated and possibly caused an issue, or it eventually provides the means for manual execution on another target.

Review step – applies database project checkup against custom rulebase for coding best practices. It generates a detailed report (Enforce_report.html) on found issues, their impact level, where are they located and what type of issues. An additional summary is also created (Enforce_summary.txt) for a brief summary of what objects were processed.

Test step – Executes database unit tests against the built database. It generates a report (Test_summary.txt) on which unit tests were applied, their pass/fail status and a percentage of success.

Package step – the most important step in a continuous integration pipeline. As output, it creates a database script folder with scripted objects from the current database project. A package containing these scripts can be considered ready for synchronization and deployment of a new database version from the current project.

It’s worth noting that all summaries outputted by steps can be accessed from within the application, so for execution troubleshooting, direct access to output folder would not be necessary: 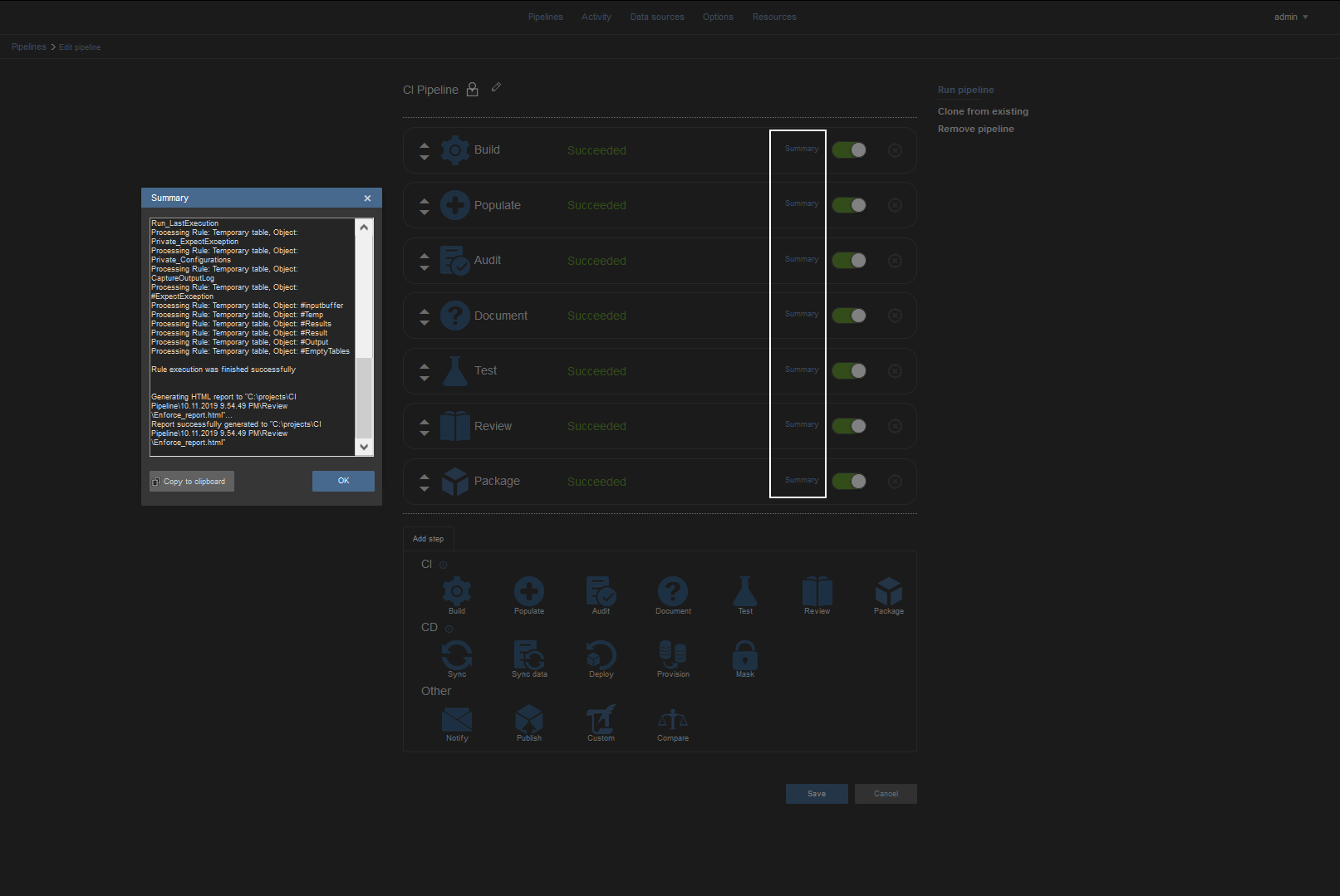 After a NuGet package with a database project is created there are several ways to store it and use it for deployment:

For example, a NuGet file created and published with the standalone Web dashboard solution during a continuous integration process can be used as input in a continuous delivery pipeline created with TeamCity plugin for deployment.

Based on the methodology explained in this article, it is easy to conclude that using NuGets in many ways increases the versatility of a database deployment process with ApexSQL DevOps toolkit and review management for each project or build version.