Summary
This article explains the new feature – Demo kit. It provides a way for the user to evaluate ApexSQL Unit Test without affecting the current databases and without the need to set the environment and install necessary pre-requisites

What does this demo kit do, consist of?

Why we implemented demo kit in ApexSQL Unit Test?

How to install and use the demo kit?

The option to create a demo kit is located in the Add database dialog, under the Unit Test explorer tab: 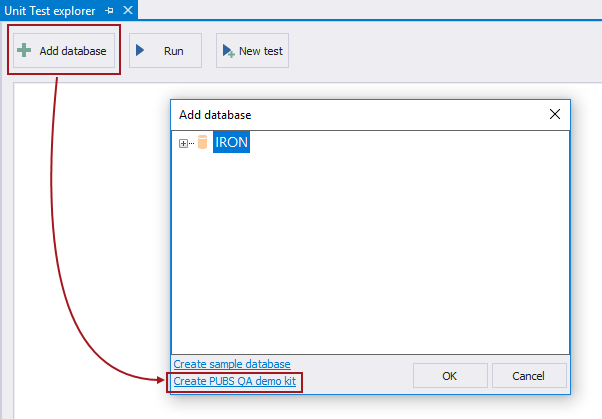 It is necessary for the SQL Server instance to be selected (highlighted), in order for the demo kit option to become available. By clicking the Create PUBS_QA demo kit option, the following steps will be automatically performed:

After the demo kit installation is finished, PUBS_QA database can be found in the Object Explorer pane, and it will be added to the Unit test explorer tab, as tSQLt will be pre-installed:

The following is a table that contains all unit tests that will be created:

The next step after the installation

The next step is to run unit tests against PUBS_QA database from the Unit Test explorer tab:

Test results shows that 2 out of 15 available tests failed:

The information about failed tests is available in the Test result messages section:

Test results provide the user with the information about how to fix the failed test:

To fix the failed test, either test itself should be modified, or an object that is causing the failure. Let’s edit the first failing test, using the Edit command from the context menu:

By clicking the Edit command from the context menu, SQL script of the stored procedure that represents a unit test will be opened in a new query. A portion of the SQL script that is by default commented is:

The cause of the failing test is described, as well as how to fix it. Under the commented part, the update statement is specified that will add missing prices. Let’s executing the suggested update statement against the PUBS_QA database:

This will update remaining NULL values in the price column with the appropriate values, so the next time the test run, it will pass:

In addition, the icon in the Unit test explorer will be changed, showing that the previously failed test now passed:

A portion of the SQL script that represents the selected unit test is as follows:

The last two lines shows simple ALTER statement that can be used to change the type of the logo column from image to varbinary. Let’s execute the suggested statement:

As a result, test will pass, which is shown in the Test result messages section:

In addition, the icon for the selected test will be changed, showing that test passed:

The user can explore the rest of unit tests, change them, and check the test execution results. The advantage of the demo kit feature is that ApexSQL Unit Test can be fully explored without the need for any previous preparation in the user environment, and without affecting the existing databases. PUBS_QA database can be deleted at any point, and created again with a default set of unit tests.