Summary
This article describes how to set and use the Execution alerts feature.

This feature analyzes SQL code, that is about to be executed, against a defined set of rules with the ability to block query execution and produce a warning message, that provides the option to Proceed or Cancel, in which case the script will either be executed or the execution will be aborted, respectively

For example, if is attempted to execute a Delete statement, without a Where clause, like the statement below:

The following warning message will appear: 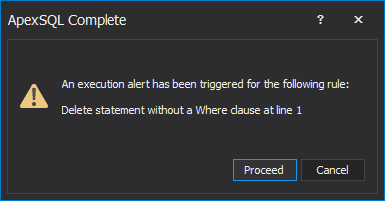 If there exists more than one SQL statement that can cause potential problems, all problematic SQL statements will be detected and displayed with a number of lines that indicates where that statement is located: 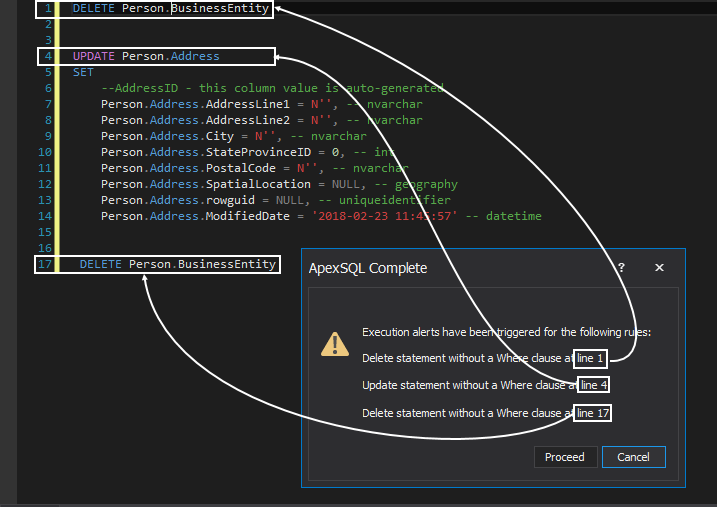 All these alerts are located under the Execution alerts tab of the Options window: 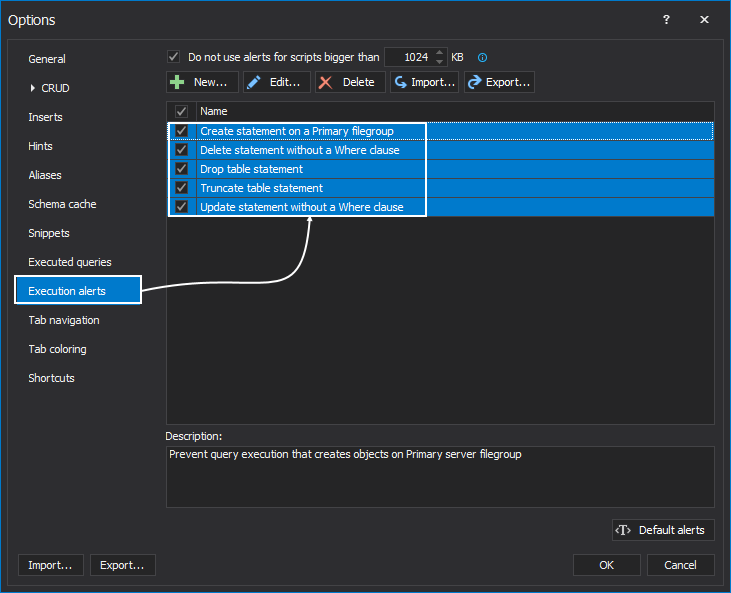 Additionally, to avoid performance problems or other issues, the option can be set on the maximum size of the SQL scripts the execution alerts will be run by entering a desired value in the Do not use alerts for script bigger than field: 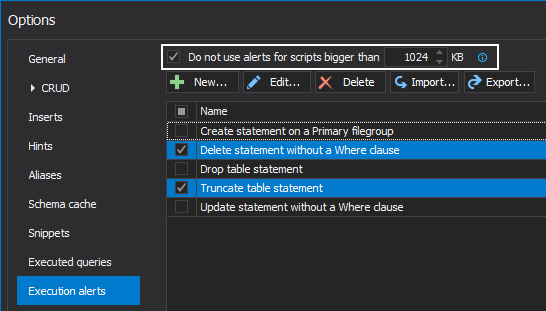 The rules will be included in the executing process of the SQL code can also be selected: 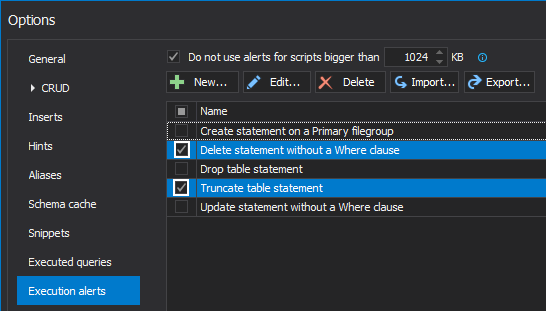 Also, all deleted built-in alerts will be restored when click the Default alerts button.

To create a new alert, under the Execution alerts tab, click the New button: 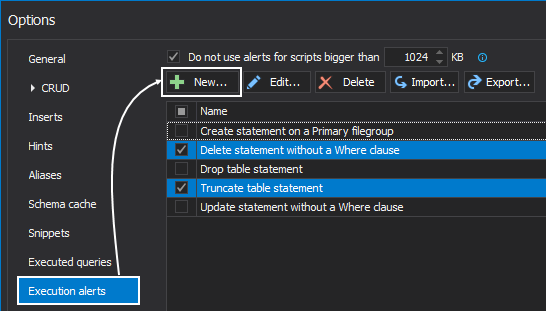 This will open the New alert window: 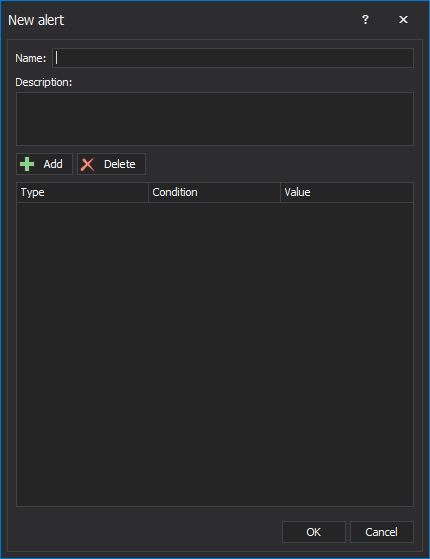 On this window, a new rule name and conditions can be defined.

Rules are divided into 4 different components:

The statement context option defines the alert scope based on the type of statement e.g. create, drop, update, delete and/or truncate.

The image below shows the creation of an alert that blocks the execution of SQL code that contains a Drop statement: 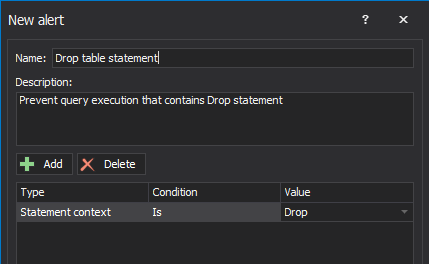 Now, when execute the code below:

The following message will appear: 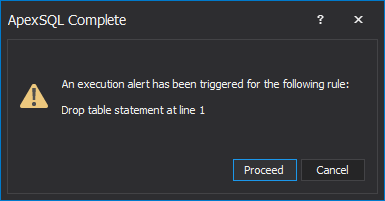 The statement clause option offers checking for existence or lack specific clause (e.g. Where clause) in SQL statement that is being analyzed.

For example, if an alert is created on a Select statement like on the image below: 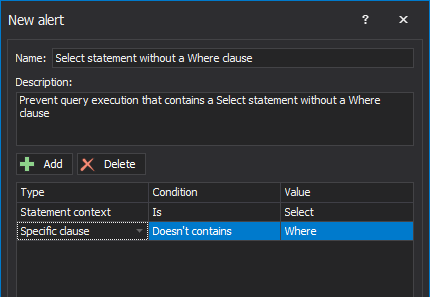 The execution alert message will appear for every block of SQL code that contains a Select statement without a Where clause. For example, if the following code is executed:

The message below will appear:

The Data option offers checking for existence or lack of a Temporary table in the SQL statement that is being analyzed.

For example, if the following SQL code is executed:

Data from the #Colors temporary table will be deleted.

To prevent this scenario, let’s create a new alert the that will prevent execution of the Delete statement without a Where clause even on a Temporary table. On the Execution alerts tab press the New button, this will open the New alert window. Enter the rule from the below image and press the OK button: 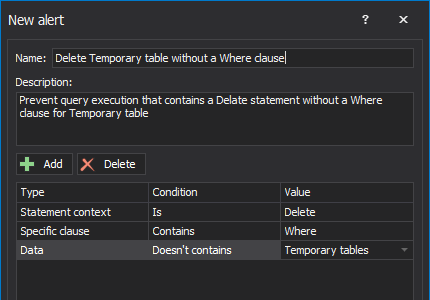 Now, when execute the above-mentioned SQL code the following warning message will appear: 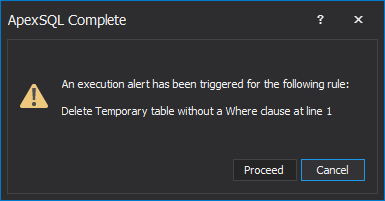 The custom text rule component is used for checking if a statement contains or doesn’t contain a defined text string.

Now, when the code that contains the Inner join clause is executed, for example:

The following message will appear: 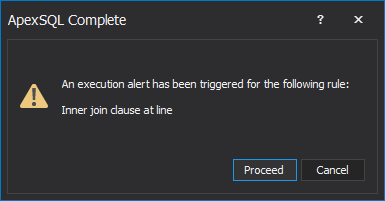 Q: Does the Execution alert feature analyze selected code in just the selected script or the whole script?

A: The Execution alerts feature work on both ways.

If nothing is selected in the query script then this feature analyzes a whole script that is about to be executed against a defined set of rules, but if is selected the part of a script than that selected code will be analyzed and if a rule violation is detected then the appropriate warning message will appear (e.g. deleting data without a where clause):

Q: Where is the information about the execution alert is stored?

A: By default, execution alert is stored in the following location:
<Drive>: \Users\<Current_user>\AppData\Local\ApexSQL\ApexSQLComplete\Alerts

Q: Can I use my saved execution alerts on a different machine?

A: Yes. The execution alerts can be used on multiple machines. This can be done by copying the content of the Alerts folder to the appropriate location on another machine where ApexSQL Complete is already installed.

Q: Can I edit the execution alert outside the host application (SQL Server Management Studio or Visual Studio)?

A: Yes. XML files that keep stored the information about the execution alerts can be edited.

Q: How can I disable the Execution alerts feature?

A: Under the Execution alerts tab of the Options window uncheck the check box next to the Name column for alerts:

Q: Can I transfer alerts from one machine and share it with others?

A: Using the Import/Export options in the Execution alerts tab, any and all alerts can be saved as a compressed file and used across the team:

ApexSQL Power Tools for VS Code