Summary
The purpose of this article is to explain the scripting options ApexSQL Source Control provides for comparing objects.

ApexSQL Source Control provides the ability to extensively configure how objects from a local database are scripted in order to be compared with or committed to a repository, as well as the way changes are applied. 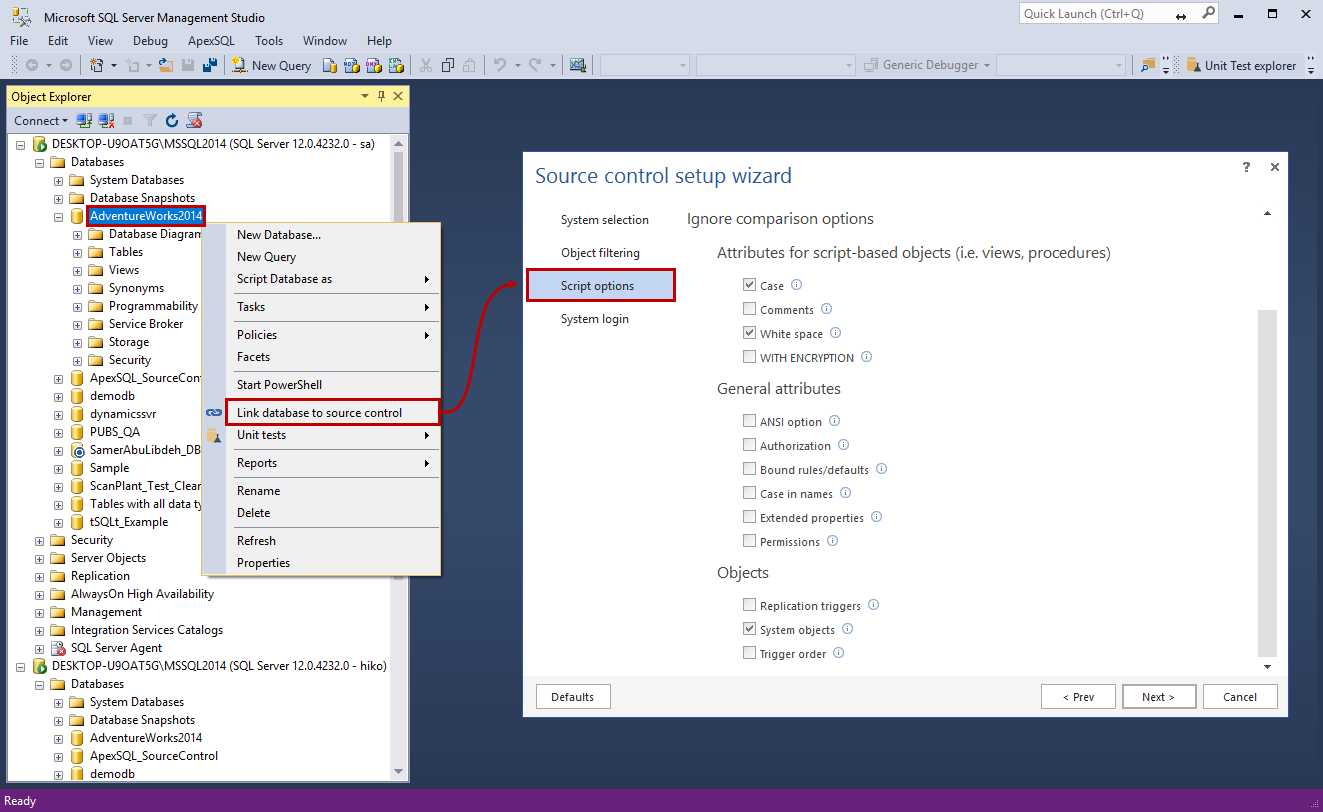 The script options are divided in categories regarding the parts of the script they affect:

Attributes for script based objects

Developers may work on their own scripts in various versions of SSMS or different platforms, like Azure, and commit changes to a central repository.

When taking into consideration the different scripting styles of each developer or comments they may add to their scripts for their own purposes, then source control could detect a great number of differences between local objects and the ones on the repository. These “false positives” contribute nothing to the overall definition or functionality of those objects. In order to ignore these, ApexSQL Source control provides options to ignore case, comments or white space when creating the synchronization script.

Here the user has the ability to exclude various attributes of objects, before committing them to a repository:

Those options help developers narrow comparisons, while avoiding potential risks. Take the ANSI_NULLS option for example. If Set ANSI_NULLS is off, basic statements like CREATE, INSERT or DELETE could fail on indexed views. Also, SELECT statements could lead to SQL Server ignoring index values and producing unexpected results or errors. As this option is rarely changed without recreating an object, it can be ignored and excluded from the synchronization script.

Here is the generated script for a view with “ANSI options” on and off: 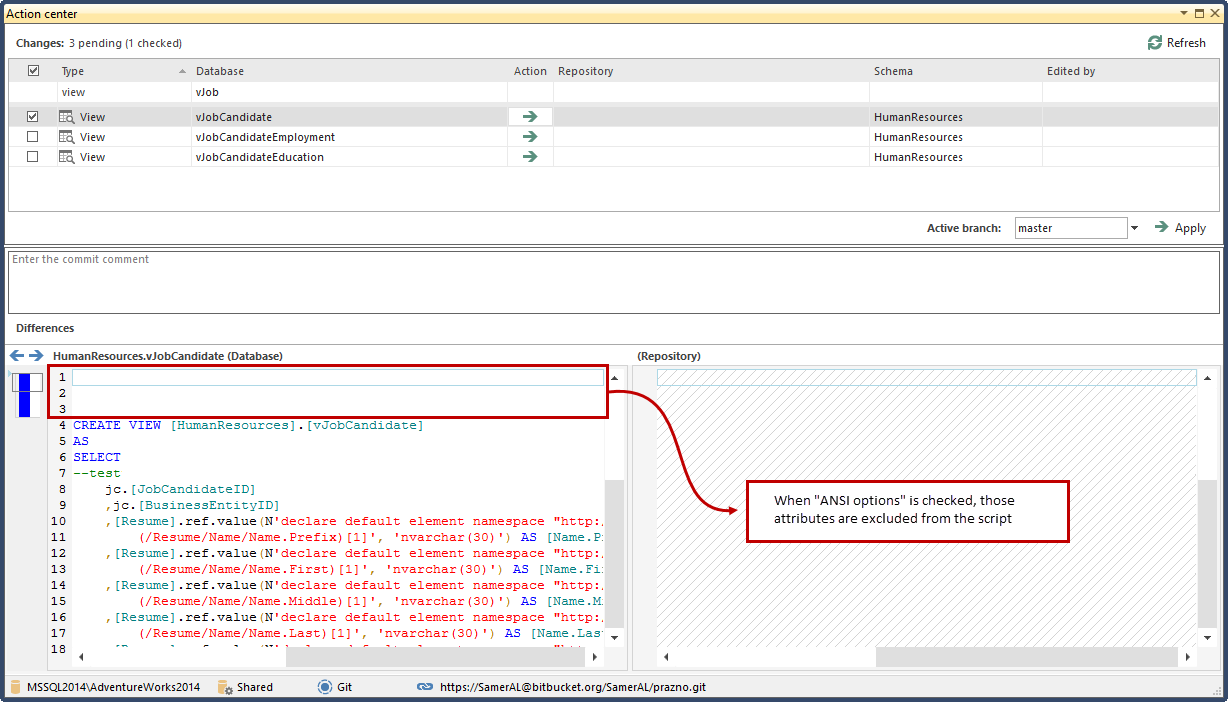 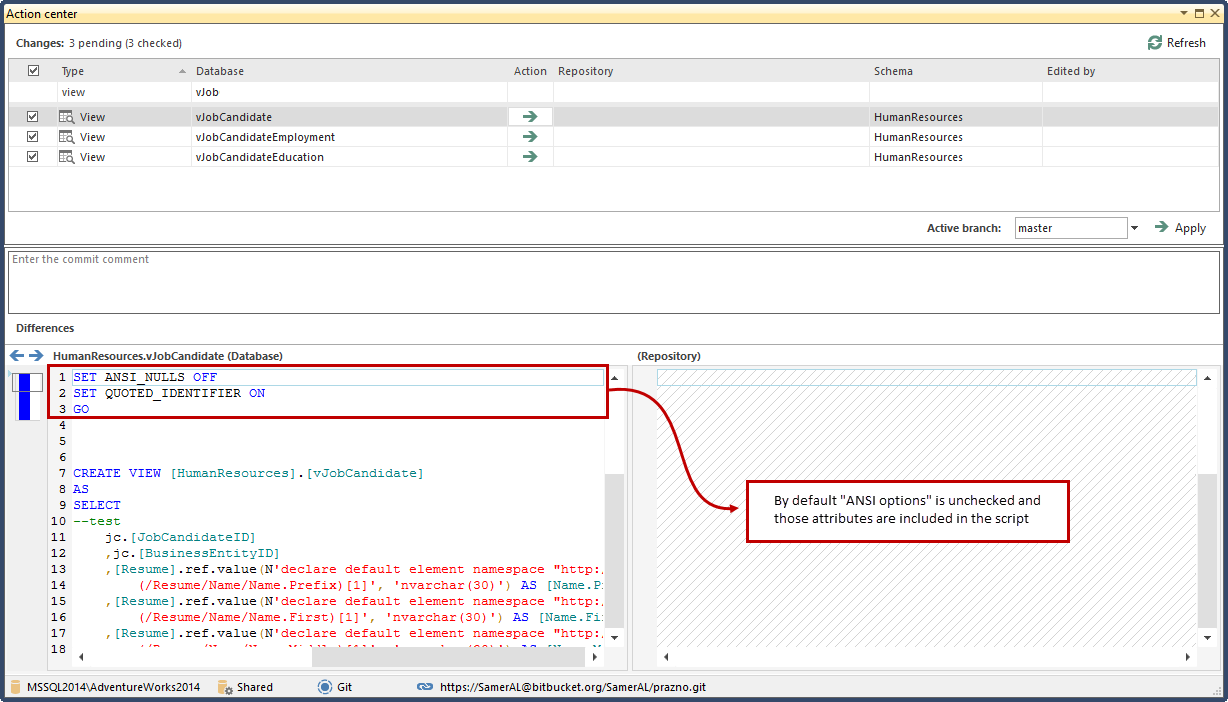 With these options, certain objects can be excluded from the synchronization script.

In a scenario where replication is active, a trigger is created for each table that is included in the updating subscription. For the replication to work correctly, this trigger must always be set as a first trigger. If a table that uses sp_settriggerorder to create a first trigger is introduced to the subscription, replication fails and it throws an error. In order to avoid such conflicts, users can choose to ignore DML triggers’ order by excluding statements like:

There is a long list of attributes that users can choose to ignore when the synchronization script is created. Sort order of index columns, collation, Fillfactor, foreign or primary keys, indexes and statistics are only some of them.

Two examples are the page_lock and row_lock attributes. In a heavy transaction environment, row_lock in combination with lock escalation attributes can lead to poor performance and even block users from executing queries against a locked table. For databases that are under Source Control, it is essential that multiple users can have access and make changes to certain objects. There are options to ignore each of those attributes when committing objects to a repository, enabling users to access and edit the object as needed, and re-enable row_lock in the local database when necessary. 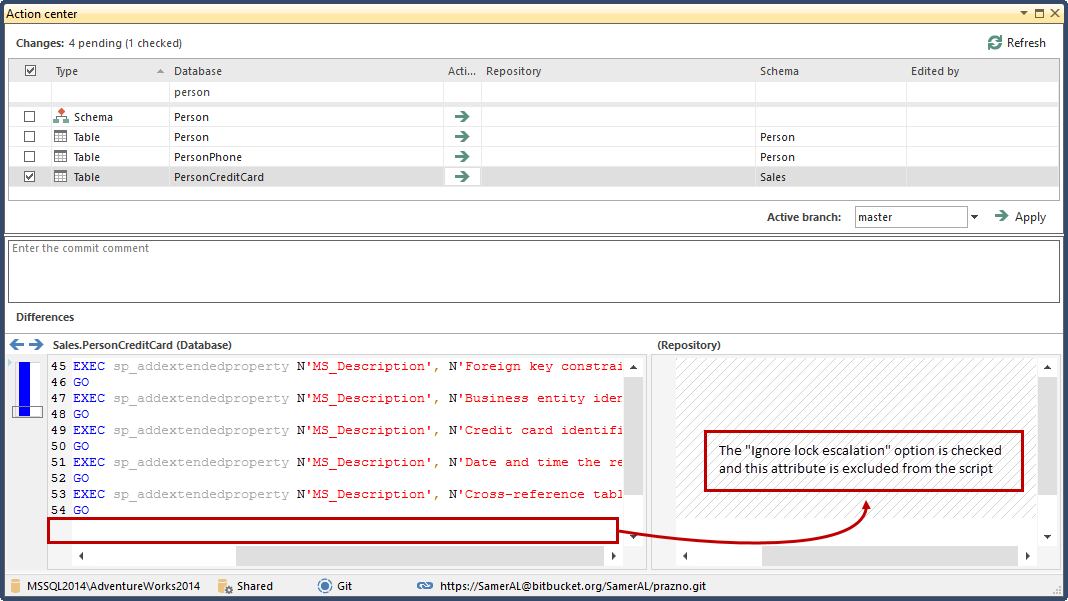 Here is an example of how those options work: 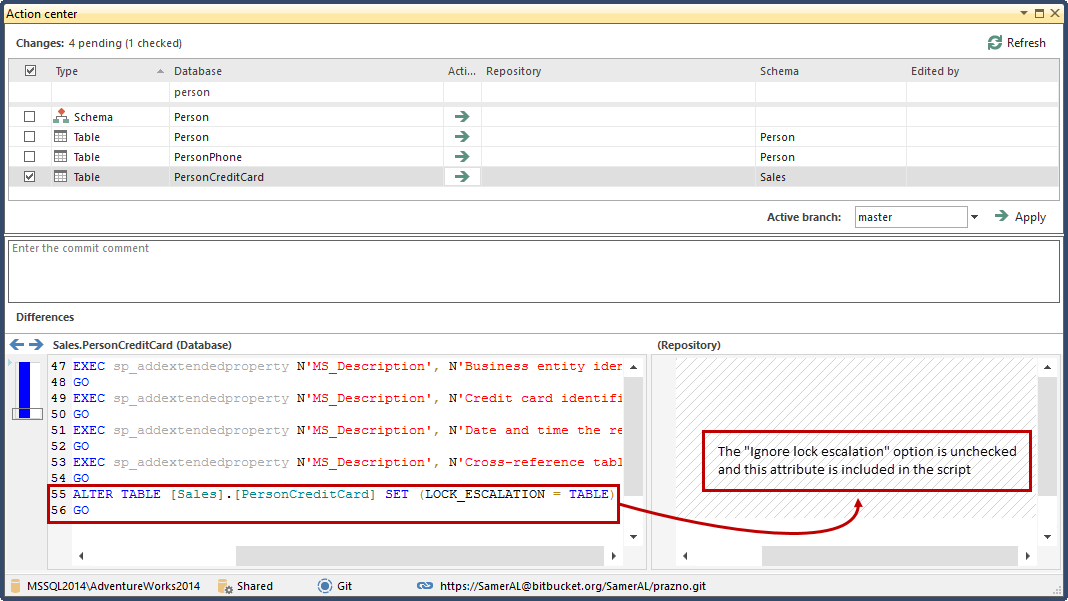 These options affect the way the synchronization script is deployed, without affecting specific objects.

If an object included in the script cannot be found in the database, the Action center will give an error and the commit action will be rolled-back. To avoid such issues, there is an option to add an IF EXISTS statement to the synchronization script before every DROP, CREATE or ALTER statement.

Similar errors could be caused by DDL triggers that are preventing changes to a database schema, like dropping or altering a table, and they can be avoided by checking the “Disable DDL triggers” option. This will temporarily disable DDL triggers, allowing the script to run correctly, and re-enable them afterwards.

Another option is to use DROP/CREATE statements when creating an object instead of ALTER, which is used by default. This can be helpful in certain occasions, like trying to force ordinal position of a column inside an existing table.

Last but not least, users can add a WITH ENCRYPTION clause to TSQL statements. However, keep in mind that this option should be used with caution, as other users will be unable to view or edit the encrypted committed objects.

Once an encrypted object is committed, this is what Action Center will display: 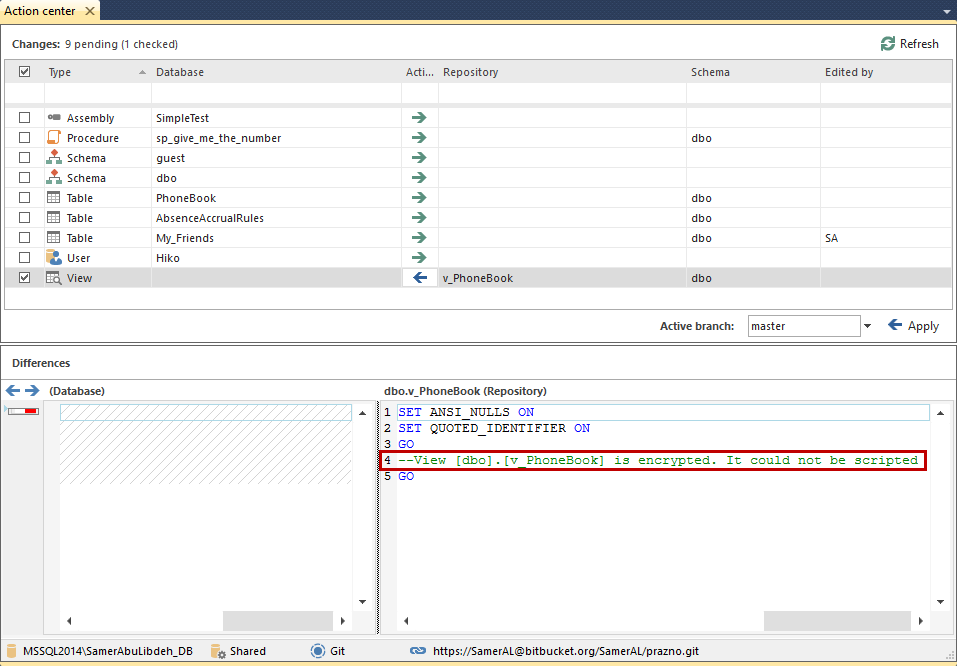 With these options it is possible to add certain informative fields to the synchronization script.

Users may choose to add automatically generated comments and print statements. Apart from that, a header may be added, that can include the author, date and time of creation and legal information of the script.

This is how the header looks: 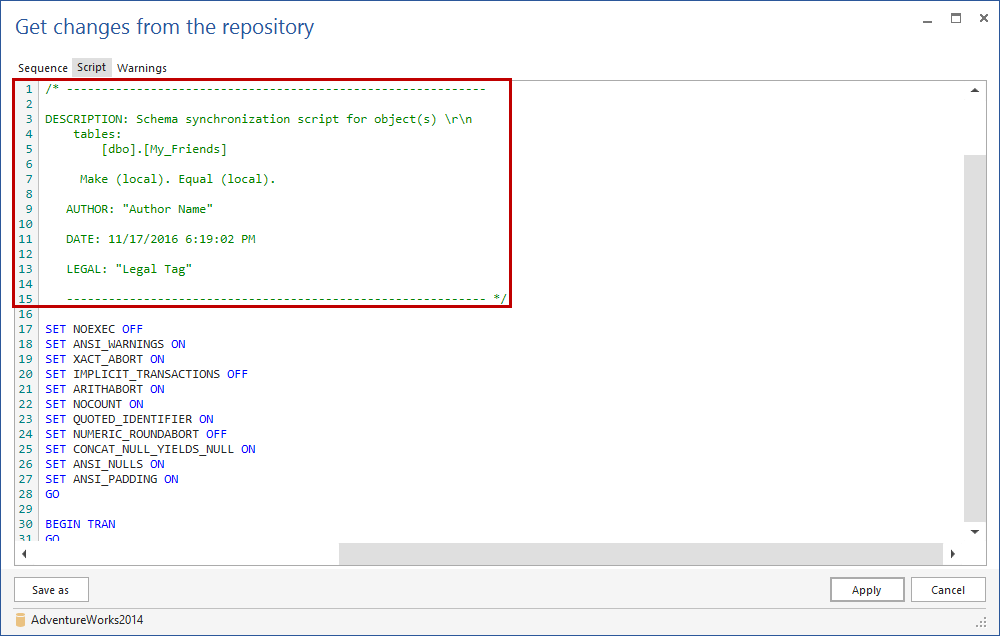 These options dictate whether the owners of objects are included in the synchronization script or not. This can be particularly helpful when comparing identical objects which are under different schemas in the local database and the repository. The user has the ability to force include owners, or choose to include them only when they are different from the database owner or the current user.

Q: Can the script options be set differently for every linked database?

A: Yes, when more than one databases are linked, the user can choose which database’s options they want to edit. 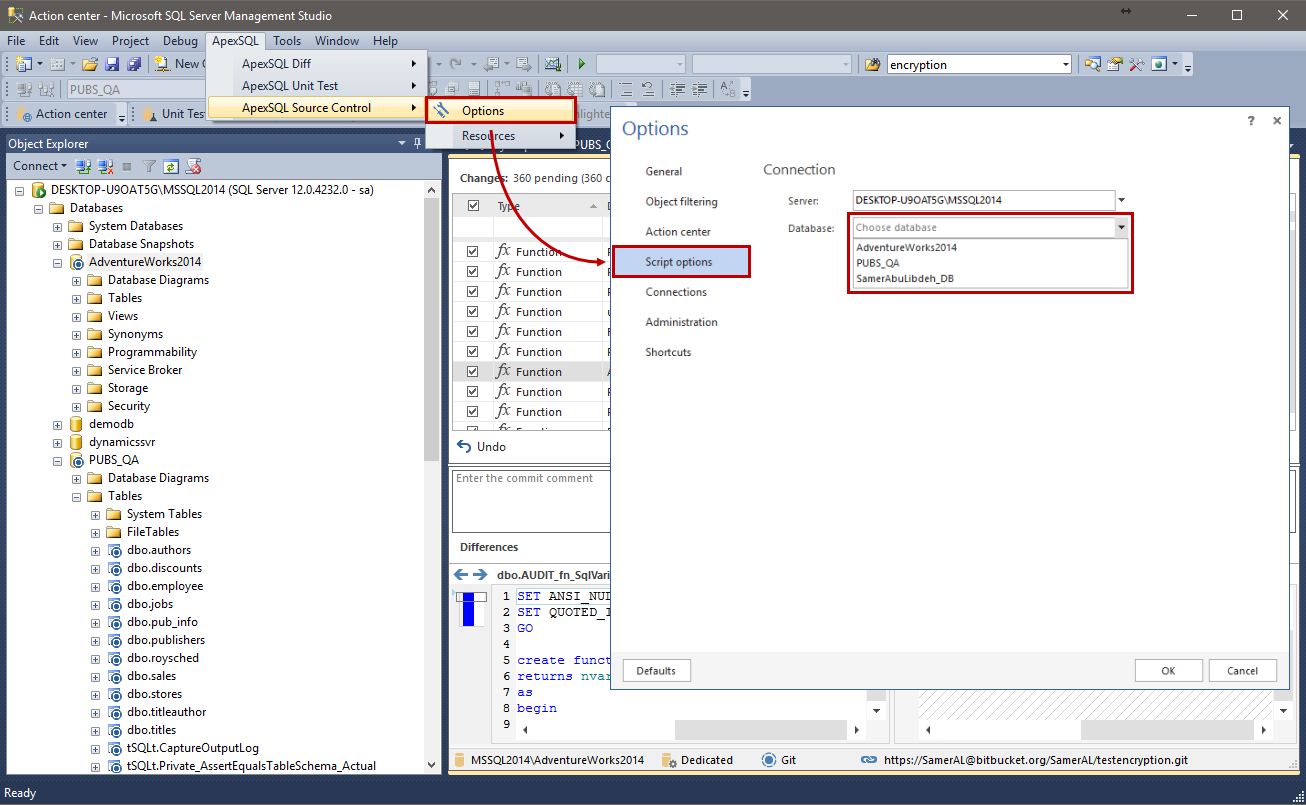 Q: Do these options affect other users?

A: No, script options only affect the user’s machine, so each developer in a team can set them up and commit objects as they see fit.

Q: Can script options be shared among users?

A: No, each user would have to edit those options separately.

Q: Do script options have to be set every time?

A: No, script options are saved locally for each database, for as long as it is linked, regardless of the connected users. When a database is unlinked, script options will have to be set up again, upon the new linking process.